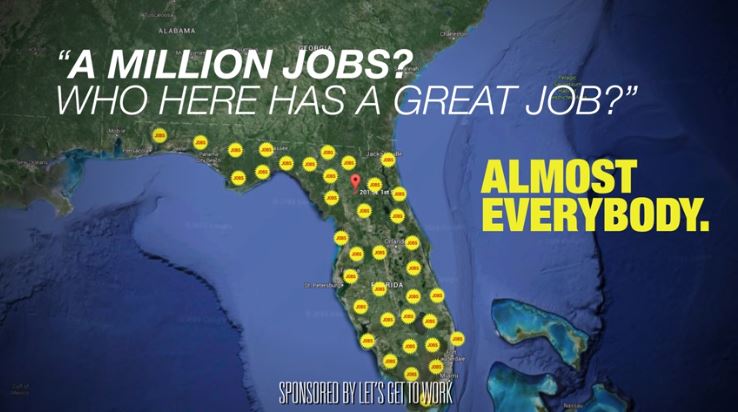 Republican Gov. Rick Scott's political committee launched an online ad today in an attempt to turn the tables on a woman who scolded him and called him an "a--hole" at a Gainesville Starbucks this week.

In a now infamous confrontation, Cara Jennings wanted to know why Scott approved legislation regulating abortion providers and she criticized him for opposing Medicaid expansion in Florida. Before leaving the coffee shop empty-handed, Scott at the time offered an unrelated talking point that "we've got a million jobs" in Florida. (Part of the confrontation was captured on video, prompting it to go viral Wednesday. Watch it here.)

"A million jobs? Great. Who here has a great job?!" Jennings yelled at Scott.

"Well, almost everybody," claims the new 60-second ad from "Let's Get to Work."

The ad mocks Jennings by simultaneously attempting to reinforce Scott's jobs claim and demonizing her for the outburst.

Scott's ad refers to Jennings, a former Lake Worth city councilwoman, as a "latte liberal" and "terribly rude woman" and sarcastically points out that she's a self-proclaimed "anarchist," who has in the past refused to say the Pledge of Allegiance.

"That woman clearly has a problem," the narrator says, before noting that 9,300 jobs have been created in the Gainesville area since Scott took office in 2011 and the unemployment rate there was cut in half.

In answer to Jennings' question, the narrator concludes that "almost everybody" has a great job in Florida -- "except those who are sitting around coffee shops, demanding public assistance, surfing the Internet and cursing at customers who come in."

Photo credit: Screen-grab from Let's Get to Work / YouTube