Interim state Surgeon General Celeste Philip on Friday responded to a letter from 11 members of Congress demanding an explanation of how Florida changed its count of new HIV cases.

The members of Congress, which include Republicans and Democrats from across the state, wrote to Gov. Rick Scott earlier this week asking about why the Florida Department of Health revised the number of new infections reported in 2014 from 6,147 to 4,613.

That 25-percent change was much larger than adjustments made in recent years, a Tampa Bay Times analysis found. It was made as the state faced criticism for a spike in HIV cases, particularly in South Florida, which led the nation for new infections.

Philip directed the members of Congress to the HIV Data Center, a website launched Thursday that explains the basics of a process known as "de-duplication." The Centers for Disease Control and Prevention, she wrote, comb through data reported from every state and try to identify possible duplicate cases, but the states are ultimately responsible for ensuring their case numbers are accurate.

She also said she is "happy to sit down and more closely explore the data with you at any time."

However, Philip did not provide details requested by the members of Congress about how the Department of Health's process for removing duplicate cases has changed, or specifics about how each infection was reclassified or removed.

The Times has been asking for this information since March and has not received an answer either.

A spike in reported HIV cases was among the reasons Surgeon General John Armstrong was not confirmed by the Florida Senate earlier this year. In the aftermath of Times reporting on the state's revised data, U.S. Rep. Kathy Castor, D-Tampa, called for a federal investigation.

Posted by Michael Auslen at 11:29 AM in 2016 Florida Legislature | Permalink | Comments

Here are the most vulnerable seats in Florida's congressional delegation

via the Tampa Bay Times' @loujacobson

For the fourth straight election cycle, the Buzz is publishing periodic rankings of the most vulnerable seats in Florida's U.S. House delegation, which includes 17 Republicans and 10 Democrats. This is our first attempt to compile rankings since June 2015 -- and a lot has happened since then.

Thanks to newly redrawn district lines, an open U.S. Senate seat that attracted U.S. House members from both parties, a smattering of retirements, and some primary challenges to incumbents, nearly half of Florida's seats in the U.S. House - 13 out of 27 - are in some type of flux this year.

Despite the delegation's current volatility, though, only a few seats are actually at risk for a party switch in November -- the criteria we use for inclusion this list. Here are the seats we're keeping an eye on, in descending order by how vulnerable the incumbent party is to losing the seat on Election Day. 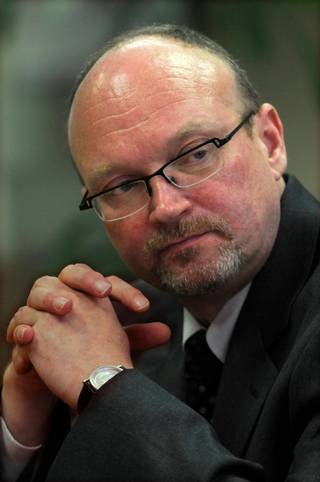 Note: We've revised the "let's not divide the party" section of this blog to provide more context and to correct an implication that Rubio was directly making that point.

Marco Rubio appears to be warming up to Donald Trump, saying Friday his “performance has improved significantly." Rubio has also continued to withold an endorsement of Ted Cruz, even though he previously praised him as the conservative in the race.

Last Sunday on Univision, Rubio said it appeared Trump will lock down the nomination.

"If he keeps winning delegates like he did the other night in New York, I think he's going to reach that number," Rubio said on Al Punto Florida. "But let's see. There are still other states to go."

Rubio, who continues to hold onto more than 100 delegates, has said he disagreed with Trump about the delegate system being "rigged." But Rubio did echo the argument that if Trump is close to 1,237 delegates, he should get the nod.

“I do think it's valid to argue to delegates: 'Look, let’s not divide the party. You have someone here who has all these votes, very close to get 1,237, let’s not ignore the will of the people or they’re going to be angry.' And delegates may decide that on that reason they decide to vote for Donald Trump. But if they don’t, it’s not illegitimate in any way,” he told Miami radio host Jimmy Cefalo on April 20. "That's why we elect delegates. That's the meaning of being a delegate, is choosing a nominee that can win."

“I’ve always said I’m going to support the Republican nominee, and that’s especially true now that it’s apparent that Hillary Clinton is going to be the Democratic candidate,” Rubio said. "My differences with Donald Trump are well documented ... ."

On the Saturday before Florida's March 15 primary Rubio was less certain about supporting Trump. "I don't know," he told the Miami Herald, his voice breaking. "Getting harder every day."

The ceremonies will be held at the Al Lawson Jr. Multi-Purpose Center on FAMU's campus in Tallahassee and be broadcast live online.

King was appointed by President Barack Obama last year to be the nation's top education official.

Putnam, a Republican and former U.S. congressman, was first elected in 2010 as state agriculture commissioner. He is widely believed to be planning a run for governor in 2018.

A super PAC supporting Republican Ron DeSantis for the U.S. Senate is stockpiling cash -- and much of it is coming from the major donors to national conservative groups.

Of the $1.2 million raised by Fighting for Florida Fund since last August, more than $1 million has come from just three donors:

Childs is a prolific donor to major conservative super PACs. Since 2010, he has given more than $8 million to groups like Karl Rove's American Crossroads, Koch brothers-backed Freedom Partners Action Fund and Club for Growth, a conservative group that has endorsed DeSantis.

Mercer, who lives in New York, is a major contributor to Club for Growth, American Crossroads and to Keep the Promise, which supports Ted Cruz for president. In total, he's given more than $29 million to conservative super PACs.

Spring Bay has contributed only to Fighting for Florida Fund.

Super PACs are allowed to raise unlimited funds to support or oppose candidates, but they cannot coordinate with candidates or their campaigns.

No other super PAC in the crowded race to replace Sen. Marco Rubio has had that degree of large-donor support.

Outside of Fighting for Florida Fund, the largest contribution to a super PAC in Florida's Senate race is $300,000 given by Coastal Construction to Floridians for a Strong Middle Class, which backs Democrat Patrick Murphy. The Miami-based company is run by Murphy's father.

She is a well-regarded veteran of Democratic campaigns, having worked worked previously as campaign manager for Natalie Tennant's Senate campaign in West Virginia and everal positions at the Democratic National Committee, including Director of African American Outreach and then National Constituency Director. She was campaign manager for Sen. Barbara Mikulski in Maryland in 2010, and before that worked for Planned Parenthood and EMILY's List.

Her selection is something of a departure from Barack Obama's Florida campaign hires in that Ward has little experience in Florida that we know of. Obama in 2008 hired Steve Schale as his Florida campaign director and in 2012 hired Ashley Walker.

The Clinton campaign has held off an announcing general election campaign hires while focusing on the primary, but the primary is no longer in doubt after Clinton's recent wins.

Republican U.S. Sen. Marco Rubio is scheduled to give the commencement address next month at the inaugural graduation ceremony for a Hialeah charter school run by the Latin Builders Association.

Rubio is a former director of the LBA. He previously praised the school during a national summit two years ago as an example of the opportunities charter schools and other "school choice" programs can provide. The school, which opened in 2012, educates its students in the construction trades and teaches them how to become future business leaders.

The former GOP presidential candidate will deliver his remarks at 9:30 a.m. May 23 at the academy's graduation ceremony, to be held on FIU's Modesto Maidique Campus in Miami.

It looks like Bill Clinton brought in a good chunk of cash for his wife's presidential campaign Friday morning in North Florida.

About 200 people showed up for a Hillary Clinton fundraiser at the Tallahassee home of Florida Democratic Party chair Allison Tant and trial lawyer Barry Richard, where the former president spoke. At $500 a person -- or $2,700, the legal maximum, for a photo -- that adds up quickly.

The campaign did not allow reporters in to the event, and attendees were instructed not to record it.

But in a 30-minute outdoor speech, the former president reportedly touted the would-be president's experience, know-how and vision for the future, pivoting toward a general election where Clinton is likely to faceDonald Trump, the Republican frontrunner.

Among those in attendance were Tant (of course) and Tallahassee Mayor Andrew Gillum, who spoke before Clinton. State Rep. Alan Williams, D-Tallahassee, whose district is to the south of Tant's home was there, as was Loranne Ausley, who's running for the House in another Tallahassee district.

Florida has become a favorite spot for the Clinton campaign to send the former president, who was himself a Southern governor in Arkansas. Last month, he held a campaign rally -- this one open to the public -- at Florida A&M University in Tallahassee, and he's spending the rest of the day Friday at similar closed fundraising events

This afternoon, Bill Clinton will be at the home of Nancy and Chuck Parish in Sarasota, and he ends the day at superlawyer/big Democratic fundraiser John Morgan's home in Heathrow.

Julián Castro, U.S. Secretary of Housing and Urban Development, will speak at Miami Dade College graduation Saturday at the Wolfson and Hialeah Campuses.

Castro is a former mayor of San Antonio and among the speculated names for Hillary Clinton's vice presidential pick. Castro keynoted the 2012 Democratic convention.

Other speakers include Manny Medina, e-Merge founder, entrepreneur, and MDC alumnus at the InterAmerican and Homestead Campuses ceremony; Dr. Mark Everett, newly-appointed MDC’s Medical Campus President who will be speaking to graduates at the Medical Campus ceremony; Mr. Javier Palomarez, president and CEO of U.S. Hispanic Chamber of Commerce at the Kendall Campus ceremony; and the Honorable Mr. Jean Monestime, chair of the Miami-Dade County Commission, at the closing ceremony for North and West Campuses graduates.