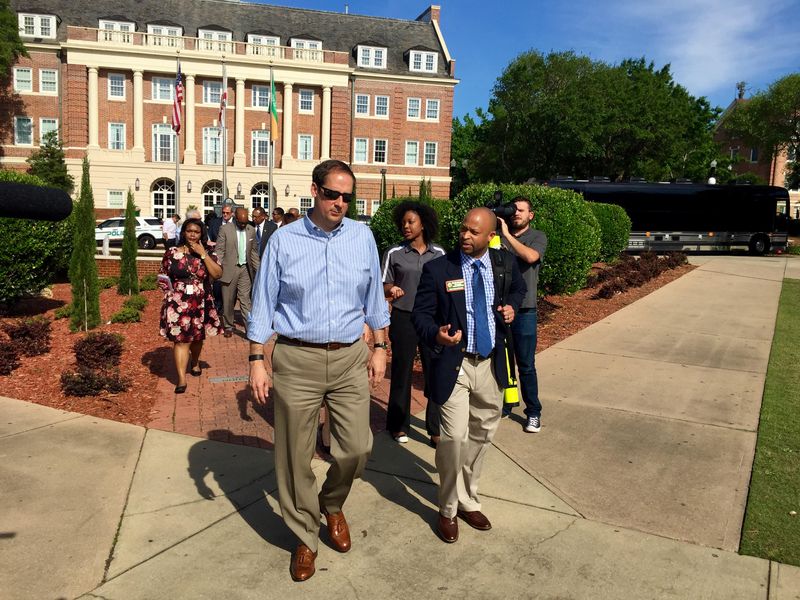 Incoming Florida Senate President Joe Negron's four-day, statewide university tour last week cost about $15,000, but the Stuart Republican said state taxpayers will be on the hook for only about $3,000 of that.

About 80 percent of the trip's costs were covered by the Florida Republican Senatorial Campaign Committee, a political committee that raises money to elect Republican senators and help them retain the chamber majority. As president-designate, Negron chairs that committee.

"I wanted to keep the cost of the tour as low as possible for the state of Florida," Negron said.

The tour was a "legislative activity," though, Negron acknowledges.

Negron organized the tour to learn about the needs and goals of each of Florida's 12 public universities as part of crafting his upcoming policy agenda. During his two-year term as president, Negron said he wants to improve the State University System and increase funding by $1 billion.

Three Senate staff members accompanied Negron for the entirety of last week's tour, as did two other senators -- Anitere Flores, R-Miami, and Lizbeth Benacquisto, R-Fort Myers -- and Cheri Vancura, who will be Negron's chief of staff when he takes over the chamber in November.

Senate spokeswoman Katie Betta, one of the official Senate staff on the trip, said hotel and meal expenses for her and the two other aides were paid by the Senate using taxpayer money.

The hotel and meal expenses for Negron, Flores, Benacquisto and Vancura were paid by the Senate majority's fund, she said. The political committee also paid for five nights of hotels for the driver of the large, black, unmarked tour bus that the group used to trek around the state. The bus rental was paid for by the political fund, too, and cost several thousand dollars by itself.

Senate aides also took one of the Senate's official black SUVs, so there was an alternative, more convenient form of transportation when it was needed, Betta said. The hotel stays for everyone cost $634 per person for the five nights.

Negron said it was "appropriate" to supplement the travel with party funds, so as to reduce the burden on taxpayers.

"The goal of Senate Majority is ultimately to elect like-minded senators who are going to support the upcoming agenda. The universities are an important part of that," Negron said.

The trip itself was bipartisan, though. Republican and Democratic lawmakers were invited to attend each tour stop. Miami Gardens Democratic Sen. Oscar Braynon -- who will be Senate Democratic leader starting in November -- attended five of the 12 events.

"I wouldn’t be upset if he used political dollars versus taxpayer dollars; I would prefer they do that," Braynon said.

Braynon said he paid for some of his own travel expenses through the Senate Democrats' political fund (Senate Victory), because the tour coincided with business he had with the committee in Tallahassee and Tampa.

"I really would prefer, even if it morphed into something political, that you just err on the side of using political dollars versus using taxpayer dollars," Braynon said. "That's probably not a bad move."

Braynon said he felt the tour was productive and that he went, in part, out of curiosity to find out more of what Negron has in mind.

"If we’re going to be looking at some big comprehensive change in the university system, it’s good to see them all," Braynon said. "It’s yet to be seen what that produces, and I’m curious as to what specifically Senator Negron wants to do."

Negron said last week he plans to announce "specific action items" later this summer, but in the mean time, he appears to have Republican Gov. Rick Scott's support for his overall vision.