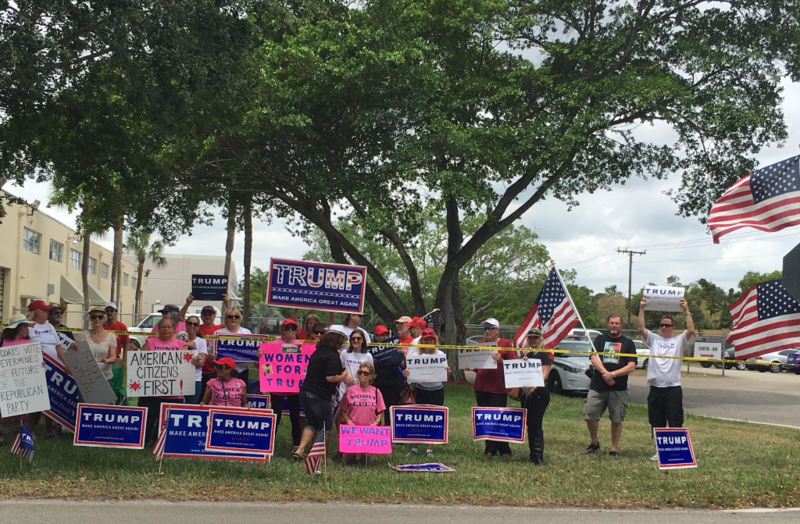 On the west side, set off by yellow police tape a few feet from a parked police patrol car, stood several dozen dedicated Trump volunteers, clad in colorful T-shirts, waving American flags at supportive cars that honked as they went by. “God-followers for Trump!” one woman yelled.

On the east side, inside the cramped anteroom of a cigar factory belonging to the future speaker of the Florida House of Representatives, nattily dressed GOP loyalists waited their turn to make a case for whey they should be delegates to the party’s presidential nominating convention.

There was little overlap. By the end of the day, when party leaders chose 15 delegates from Miami-Dade County's congressional districts, few seemed overt fans of Trump, the candidate who won the Florida Republican primary in a rout.

His backers did apply for some of the coveted positions, three for each of the five congressional districts. But they feared they’d mostly be shut out of the selection. So they staged a preemptive protest, a reminder to the GOP establishment that the front-runner wouldn’t be so easy to brush off.

“The establishment is there, subverting the will of the people so they can maintain their power and control,” said the woman who organized the demonstration, the fatefully named Dolly T. Rump. (Yes, that is her real name, she said before even being asked, whipping out her driver’s license and joking that no one choosing a fake name would go with “Rump.”)

Rump, who chairs Trump’s Broward County campaign, thought up the protest after Broward and Palm Beach Republicans picked their delegates last weekend and chose a single Trump supporter as an alternate. They left out candidates who made no secret they intended to vote for Trump in every round of July’s convention in Cleveland.

Florida's 99 Republican delegates are bound by state party rules to vote for the candidate who won the Florida primary – Trump – for three ballots. They’re unbound, free to nominate whomever they want, beginning in a fourth ballot, if a contested convention were to get that far.

Fifteen statewide delegates will get picked by Republican Party of Florida leaders next month. County leaders picked the delegates for congressional districts. If a congressional district was contained within a single county, delegates were chosen by the county's party chairman, committeeman and committeewoman. If a district spanned more than one county, the chairman, committeeman and committeewoman from those counties had a day too -- which means Miami Rep. Mario Diaz-Balart's four-county district required 12 party officials to select three delegates. About 150 people applied for the 14 Miami-based slots.

Last week in Broward and Palm Beach, that diversity proved of little solace to Trump supporters.

“There were no Trump campaign people that were selected,” lamented Richard Eddins of Margate, who like Rump ran unsuccessfully for a Broward seat. “The people who should be going [to the convention] are not going.”

So he showed up in Miami Lakes on Saturday to remind Republicans in local positions of power “Trump won the state.”

As if they could forget.

Inside the Oliva Cigar Company, offered for the selection by state Rep. José Oliva, Republicans wrestled with what they would do if they somehow did get to a fourth convention ballot without a nominee. Miami-Dade, after all, was the only Florida county where Trump lost, to hometown favorite Marco Rubio, who dropped out after losing the state. Most of those Rubio supporters haven’t turned to Trump or either of his remaining rivals, Ted Cruz or John Kasich.

“The delegates actually matter this time,” said Jessica Fernandez, the president of the Miami Young Republicans who campaigned for Rubio. “If I’m selected, I will do my duty. Let’s see. Maybe there’s somebody nominated who didn’t run for president.”

“I’m for who the Republicans of Florida elected,” said Lisa Aurora Sacco, a member of the Miami-Dade Republican Executive Committee. “It’s not about us. We represent the people.”

“I don’t agree with that,” said her friend, Diana Arteaga, who had campaigned for Jeb Bush.

Among the delegate contenders were party leaders taking part in the selection process, and current and former elected officials, including ex-U.S. Rep. David Rivera, who is running again for the statehouse. He helped nominate Bob Dole in 1996 and John McCain in 2008.

“In the past it’s been a very routine exercised, because everything’s been predetermined before the convention,” he said. “This year could be a little different.”

Rivera, who campaigned for Rubio, his longtime friend, said he hasn’t picked a new candidate. “Qué será, será,” he sang to reporters.

He opposed the notion that national Republicans might change nominating the rules – either in Cleveland or this week when they meet in Broward – to hurt Trump or benefit one of his rivals.

“Why would you change the rules in the middle of the game?” he said. In the future, though, he favored unbinding Florida delegates after a single convention ballot, as most states do.

His goal for the convention is a “unity ticket,” he said, despite of the friction among Trump and his rivals.

He didn't get chosen.

Here are the delegates chosen for each congressional district:

An earlier version of this post incorrectly stated that Saturday was the last day for county Republicans to pick delegates in Florida. While that was true under the party's original calendar, some counties later pushed back selection until later in April.