Bill Nelson: It's 'premature' to talk about VP rumors; Bernie should drop out 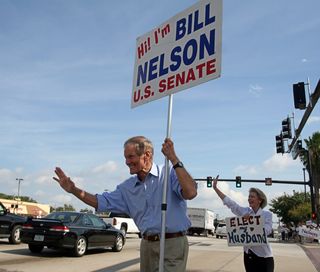 Sen. Bill Nelson has been among the names tossed around for a possible Hillary Clinton vice presidential pick.

The idea makes some sense: A long-serving, respected senator, late in his career, popular in Florida, which has 29 electoral votes (though with Donald Trump as the likely Repubican nominee, recent polls suggest that may not be a factor).

But Nelson isn't saying whether he's being considered.

Nelson, a Democrat who was first elected to the U.S. Senate in 2000, is up for re-election in 2018. It's widely believed that Republican Gov. Rick Scott, whose term ends that year, will launch a well-funded challenge. Scott's name is also in the vice presidential zeitgeist.

"I've heard that, and I'm prepared," Nelson said. "You might want to check the polls on the favorability rating of those of us who are privileged to hold public office in Florida."

A PPP poll released in March showed similar approval ratings for the two men -- 38 percent for Scott and 40 percent for Nelson -- but Scott has a much higher disapproval (48 percent) than Nelson (32 percent).

In addition to his own career prospects, reporters asked Nelson about the presidential race Thursday in Tallahassee.

He's confident Clinton will win Florida, even if Trump gains some popularity.

However, he said, it's time for Sen. Bernie Sanders to stop running against the Democratic frontrunner.

"Bernie has made his point now, and it's time for the Democrats to unite, and Bernie ought to stand down," he said.