« In this age of political disruption, is the party as we know it over? | Main | Hillary Clinton says Donald Trump hoped for real estate crash » 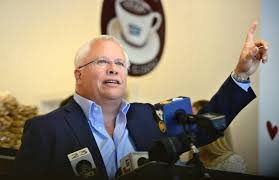 At least two Republican U.S. Senate candidates would stay in the race and challenge Sen. Marco Rubio if he changes his mind and decides to seek re-election.

Carlos Beruff, a Bradenton developer, and Todd Wilcox, a defense contractor from Orlando, said Friday that they intend to stay in the race.

"Carlos Beruff is staying in this race no matter what," campaign spokesman Chris Hartline said when asked about Rubio getting pressure to reconsider.

"As a conservative I have no intention of leaving this race just because another career politician gets in," Wilcox said in a statement, "especially one who fought for amnesty for illegals and oversaw tax increases as a city commissioner."

A third, U.S. Rep. David Jolly, R-Indian Shores, said he would stop his campaign if Rubio decides to run for re-election.

"I would withdraw from the Senate race and support Rubio for re-election," Jolly said in a text message.

Rubio has said he intends to return to the private sector, but he is under heavy pressure to run for re-election from Republicans worried about losing the seat. Rubio on Thursday acknowledged to reporters on Tuesday that people he respects are asking him to run for re-election. But Rubio he said his "very close friend" Carlos Lopez-Cantera is already in the contest.

"Look, if the circumstances were different, but they’re not," Rubio said. "This is the fact: Carlos is in the race. He’s a good friend, he’s a good candidate, he’ll be a great senator."

Hartline said talk of Rubio getting into the race is being generated by the same types of political insiders that once tried to talk Rubio out of the 2010 race for Senate.

"Marco Rubio made the right decision in 2010 when he refused to get pushed out of the race by the power brokers in Washington," he said.  "As usual, Washington Republicans think they can control the race, but the voters of Florida will decide who our nominee is, and we feel confident about where we are."

"We are not concerned with D.C. chatter," said Brad Herold, DeSantis' campaign manager. "We're focused on continuing to run the strongest campaign of any candidate in Florida."