In this age of political disruption, is the party as we know it over? 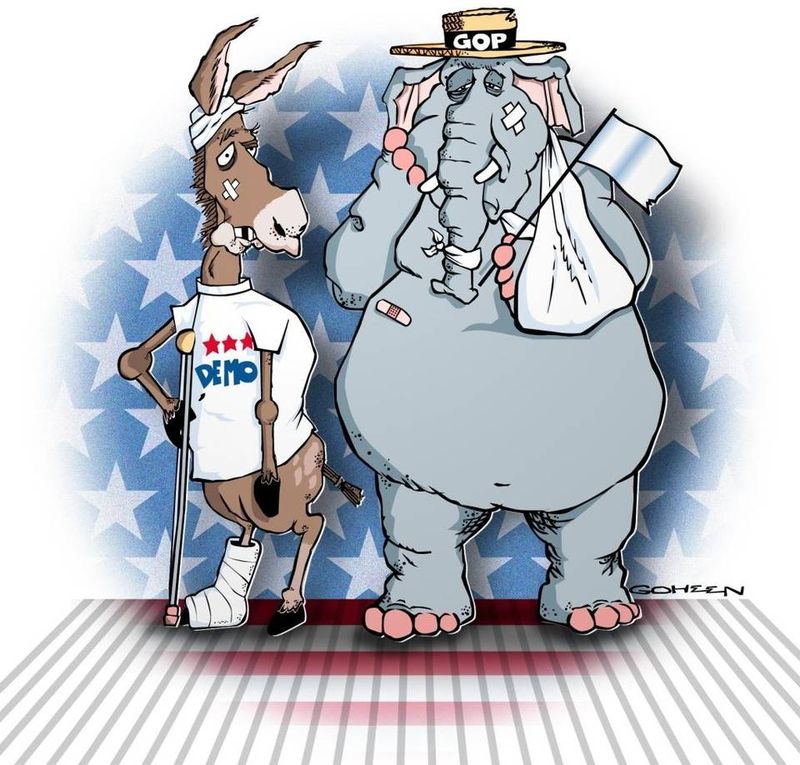 This summer may be remembered not only for a blue moon and the welcome end to a bitter presidential primary, it may also mark the time America’s century-old political parties went on life support.

At the top of the ticket, both the Florida Democratic Party and the Republican Party of Florida have anointed presidential frontrunners who are seen by most voters more negatively than positively. Corporate donors, the bread and butter of the party diet, are circumventing the parties in large numbers by contributing directly to candidates’ committees.

In Florida, the often-reliable bellwether for the nation, party membership is steadily eroding as the majority of new voters don’t register with any party and fewer new voters are registering than have in previous presidential years.

Then there are the casualties.

Florida Congresswomen Debbie Wasserman Schultz, the head of the Democratic National Committee, has beentargeted for defeat from within by Bernie Sanders, the 74-year-old Vermont senator who is the overwhelming favorite of the youth vote. Jeb Bush, Florida GOP’s favorite son, is so disgusted by Donald Trump and his message he has announced he won’t vote for his party’s nominee. And GOP candidates in Hispanic-rich South Florida are keeping their distance from the frontrunner.

With a battleground this bloodied, can political parties be saved?

It’s an uncomfortable question that could have serious implications for future statewide candidates like Agriculture Commissioner Adam Putnam, Tampa Mayor Bob Buckhorn and Congresswoman Gwen Graham. Each hopes to run for governor in 2018 relying on a durable, traditional, governing coalition.

But 2016 laid waste to durable traditions as Florida and the nation showed that its allegiance to political parties was over.

“I think we’ve got 20 more years of disruption ahead of us,” predicts Steve Schale, the Democratic consultant to who steered Obama’s victory in Florida in 2008. “You’ve got a generation of people who are growing up in a time when traditional organizations are not vital to the world. We have to figure out what do we look like in the next 20 years, and do we even exist?”

The numbers tell just part of the story. Of the 2.1 million new registered voters in Florida since 2012, 28 percent have registered Republican, 31 percent Democrat and 42 percent registered anything else, according to data analyzed by Associated Industries of Florida.

David Johnson, former executive director of the Republican Party who worked on Bush’s Right to Rise political committee this election cycle, is among those who say his party has reached an existential crisis.

“The Republican Party is torn apart,” he said, and how it handles Trump’s divisive campaign will be the crucial test. “There is no question in my mind there is a path toward a viable third or fourth party in the future.” More here.