Back when Raymond Carvil was both a pastor at a Baptist church and a bomb squad technician for the city of Miami, he said his seemingly disparate career choices were part of the path God had chosen for him. Now that he's retired, he says that same path has led him to a new, potentially combustible career -- as a politician.

Carvil, 52, filed this month to campaign for the Miami Gardens City Council seat 5, an at-large position currently held by incumbent David Williams. Though he's never run for elected office before, Carvil believes his 30-year law enforcement career gives him the experience to tackle one of the city's most pressing issues: crime.

"We do have a lot of crime that continues to go on in our city and that's not healthy," Carvil said Monday morning. "With all my years in law enforcement I can definitely make a difference."

Carvil, a native of the Bahamas who moved to the U.S. when he was 12, said he was hired as a Miami police officer in 1986. He was a plaintiff in a 1990s discrimination lawsuit against the city that remains ongoing, founded The Living Word Baptist Church in 2003, and in 2001 became a sergeant-at-arms, providing armed protection for the city's elected officials. He worked with Mayor Tomas Regalado for about six years before he was promoted to the rank of commander in September. He retired on February 29.

His promotion was criticized by the city's police union as a compensation-inflating, pre-retirement political appointment at a time when the city manager was fending off a potential bid to fire him. Carvil dismissed the allegation Monday as a product of an antagonistic relationship between himself, Mayor Tomas Regalado and Fraternal Order of Police president Lt. Javier Ortiz.

Carvil's retirement was mandated due to his enrollment in the city's deferred retirement option program, which allows public employees to build a tax-deferred nest egg while they finish out their careers on the condition that they lock in their retirement date. He said he wanted to continue his career in public service and after some searching decided to run for city council.

Carvil says he lives in the city's second district, where the incumbent still has several years on his term. So he chose to run for Williams' seat.

"A lot of the individuals I've spoken to tried to discourage me from running. They said the incumbent is a powerful man. But the way I look at it is there's a need in the community," Carvil said, adding that he received plenty of political experience in his time as Miami's lead sergeant-at-arms. "I spent 16 years working with elected officials. I'm definitely a student of protocol and way things maneuver."

Regalado described Carvil as "family," but said he doesn't expect to help him campaign since he is focused on helping his daughter, Raquel Regalado, campaign against Miami-Dade Mayor Carlos Gimenez. Carvil will join a race that also features Kevin Brown, president of the Miami Gardens Bulldogs youth football team and a member of the city’s progressive youth advisory board. The election will take place Aug. 30. 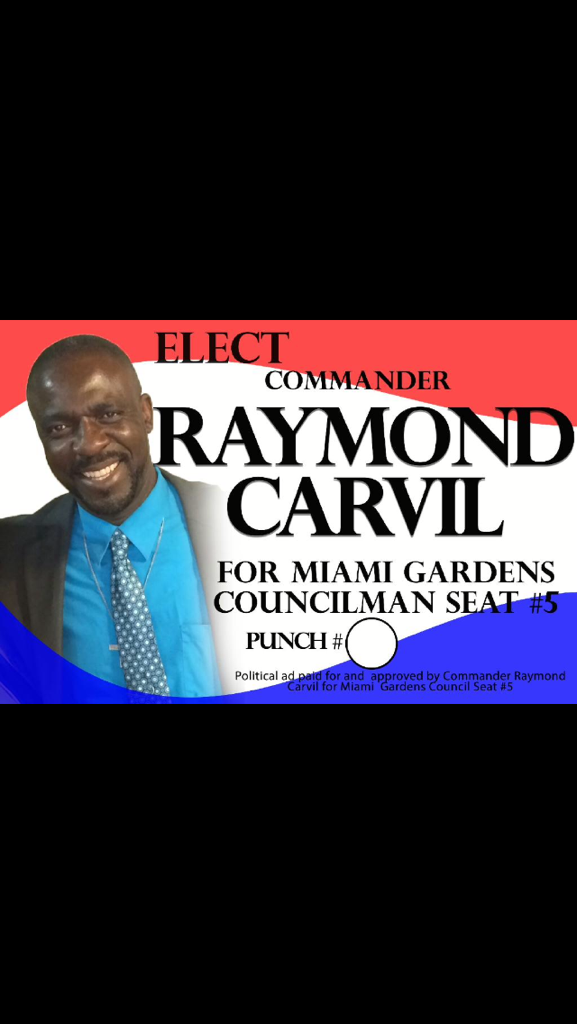