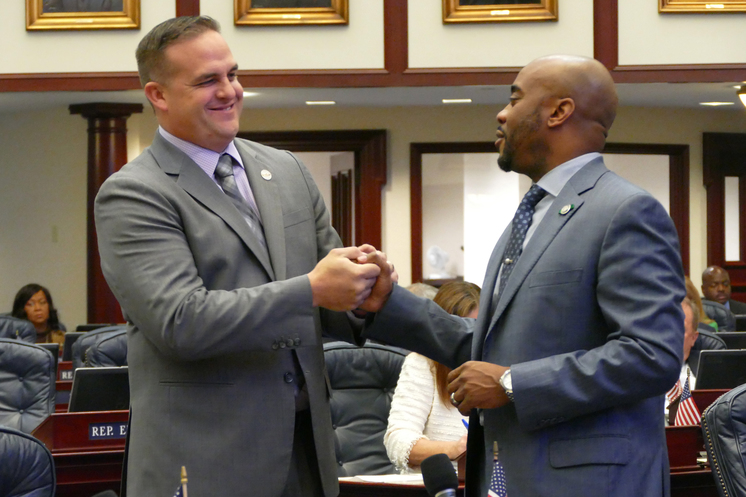 As part of an ongoing direct-mail campaign to highlight what it deems as unethical behavior by Florida elected officials, the independent advocacy organization FloridaStrong has gone after several Republican Miami-Dade legislators in recent months.

But one is now fighting back.

State Rep. Frank Artiles, R-Miami, says he plans to sue FloridaStrong because the group's organizers refuse to correct claims they made in a mailer that went out to Artiles' constituents recently and which his attorney said depicts Artiles "in an unfavorable light."

Artiles, a three-term House member, is currently campaigning for a seat in the Florida Senate, where he wants to represent District 40, which includes part of central Miami-Dade County. He faces current Sen. Dwight Bullard, D-Cutler Bay, and independent Mario Jimenez in that contest.

"My reputation is very important to me and I will not allow any organization or person to defame, slander and libel me because they think nobody’s going to fight back," Artiles told the Herald/Times. "I truly believe these organizations -- which are funded nationally through special interests -- that if you don't stand up or correct them, you're acquiescing to their bullying. I won’t be bullied by some political hacks."

FloridaStrong's most recent mailer against Artiles alleges that he is a "property appraiser by trade," "voted to raise property taxes on Florida families by $427 million," "received thousands in campaign contributions from the insurance industry" and "voted to privatize Citizens Property Insurance and protect insurance industry profits."

But, in a letter dated April 21, a Tallahassee attorney for Artiles said the claims aren't true. Emmett "Bucky" Mitchell offered point-by-point rebuttals and accused FloridaStrong of making "false statements ... that should be corrected." Or else.

For instance, Artiles is a public adjuster, not a "property appraiser," Mitchell wrote.

Artiles said he does not have a property appraiser's license, nor ever purported to have one. He criticized FloridaStrong for getting its information from newsletters and editorials.

"I represent homeowners against insurance companies, which is the direct opposite of what they are mailing," Artiles said in a follow-up email. "Moreover, I am a property insurance appraiser and umpire."

On this point, in particular, FloridaStrong appears to have confused some of the complexities of the legislative budget process.

That was a separate issue that involved education funding. Contrary to FloridaStrong's description, lawmakers actually ended up approving what they called $428 million in "tax relief."

There would have been an increase in residents' property taxes only if lawmakers supported Republican Gov. Rick Scott's push to fund increases to K-12 education using a greater share of the "required local effort," i.e. property taxes. But that didn't happen. Instead, lawmakers used a greater portion of state funds to avert an increase on the local tax burden, and that was adopted through the main appropriations bill, not HB 7099.

"Representative Artiles has always been a consumer advocate and has fought against the insurance industry since his election," Mitchell wrote. "To suggest otherwise, as the FloridaStrong mailer has done, is false and disingenuous."

Mitchell wrote that several of FloridaStrong's "false" claims also appeared in "a Google ad," via actionnetwork.org.

In written responses on Tuesday, FloridaStrong double-down on its claims and said it was merely informing Artiles' constituents of his voting record.

"In sum, FloridaStrong stands by the statements contained in its materials as such assertions are, in fact, true," executive director Charly Norton wrote to Mitchell.

In a separate letter to Artiles, Norton wrote: "We found that based on your voting record and political donations you have willingly accepted, any reasonable person would come to the conclusions laid out in the communication we have sponsored.

"We cannot apologize for your voting record or the political donations you have accepted," Norton continued. "If, however, you are upset by the fact that we have simply informed your constituents about your public record, we do hereby apologize for providing these facts to the people you represent."

Each of the mailers accuse the lawmaker of "cashing in" and accepting "campaign donations and perks while your family is left behind."