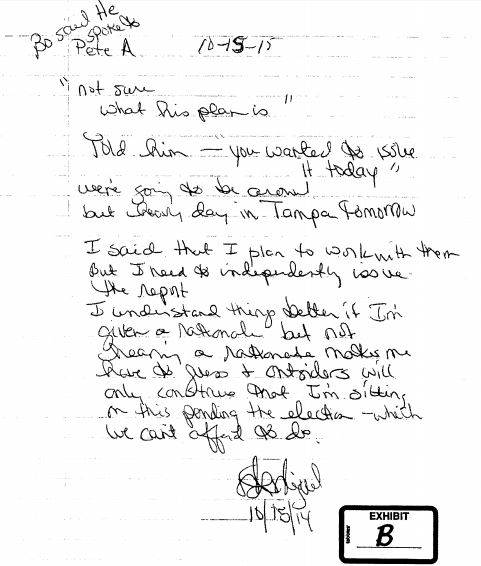 Charges of corruption against the Florida Department of Corrections escalated Tuesday as two demoted senior investigators filed a new lawsuit, accusing the agency of retaliating against them for alleging cover-ups, inmate abuse and political interference on behalf of a company whose lead lobbyist became the governor’s general counsel.

In the 544-page compliant filed Tuesday in circuit court in Leon County, Doug Glisson and John Ulm allege that their bosses systematically tried to discredit them and set them up for demotions by concocting charges, violating agency procedures and even forging signatures.

They claim that the governor’s office has wielded influence over agency investigations and point to both the governor’s former top lawyer, Pete Antonacci, and his chief inspector general, Melinda Miguel, as being involved.

Glisson and Ulm, both senior investigators in the Office of Inspector General, were demoted in May after spending the past two years speaking out. In testimony before a state Senate committee last year, they alleged that their boss, then-Inspector General Jeffery Beasley, covered up evidence of inmate abuse, dismissed allegations of impropriety by those close to him and failed to properly police violent corrections officers. They are asking the court to order their reinstatement and for the state to pay all attorney fees and lost wages.

FDC spokesman Alberto Moscoso said the agency would not comment “on active or pending litigation [that] involves the agency or any of our current or former members.”

The dozens of supporting documents filed with the court include copies of agency reports, emails and investigations that show the agency conducted a series of internal investigations into Glisson and Ulm. The inspectors allege the investigations were assigned to officers who took directions from Beasley or had conflicts of interest.

Glisson and Ulm also allege that Beasley ordered Ulm to close an investigation into the department’s former food vendor, U.S. Foods, after the company was accused of serving inmates tainted meat and engaging in deceitful billing.

In a July 2015 letter to Beasley, Ulm suggested that U.S. Foods’ former lobbyist — Pete Antonacci, the governor’s general counsel, who now serves as executive director of the South Florida Water Management District — should be questioned as should “conspirators and persons of interest” in the case. Ulm believed that the case should be referred to the federal government “because of the vast amounts of federal money involved” and because, he said, lobbyists were being paid to try to keep the U.S. Foods contracts in effect in Florida despite the allegations.

His email noted that after Antonacci went to work for the governor, U.S. Foods did not hire another lobbyist to be the liaison with the department, suggesting it didn’t need to because of Antonacci’s position of influence.

“This capital connection could come back to cause an embarrassment to [FDC] Secretary [Julie] Jones, as well as the entire Department,’’ Ulm wrote. “I would like you to reconsider your position and directive not to investigate or seek a referral to another agency concerning the various corporations who I now believe fronted for U.S. Foods.” He also indicated he was seeking whistleblower protection. Story here.

Photo: Note to the file from the governor’s chief inspector general, Melinda Miguel, indicates she wanted to issue her report but was being told by the governor’s office to wait until after the 2014 election.