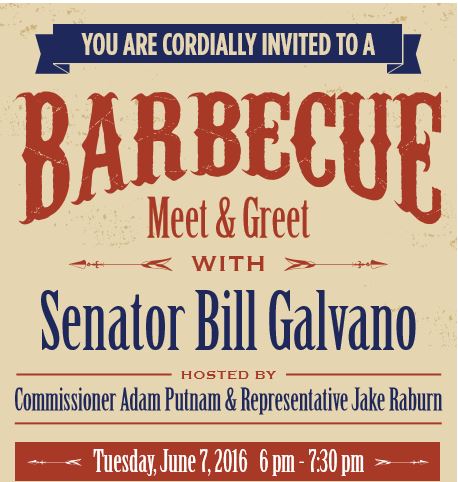 Florida Agriculture Commissioner Adam Putnam, who represented southern Hillsborough County in the U.S. House for a decade, is lending his name to help Galvano raise money and build ties in  Senate District 21, which now includes Brandon, Sun City Center and Wimauma, thanks to redistricting.

Putnam, a Republican, is listed as one of the hosts for a barbecue for Galvano on Tuesday night in Wimauma.

“I do know he is very popular in my new district,” said Galvano, who said he’s worked with Putnam in the past on citrus greening problems plaguing the groves throughout Florida.

When Putnam served in Congress from 2000 to 2010, his district included parts of Hillsborough County that are now in Galvano’s new district.

Like many state senators, Galvano is trying to adjust to new redistricting maps and introduce himself to thousands of new voters. Most of eastern Hillsborough is currently represented by Sen. Tom Lee, R-Brandon. But because of redistricting, about 100,000 Hillsborough County residents previously in Lee’s district will now be within Galvano’s new District 21. The district also includes all of Manatee County, Galvano’s home county.

Lee has already announced he would not challenge Galvano for the district and no other Republicans or Democrats have file to run against Galvano. In 2019, Galvano is in line to become the Florida Senate President if he wins re-election and Republicans retain the majority of seats in the Senate.