Anitere Flores does have a Democratic challenger, so does Rene Garcia 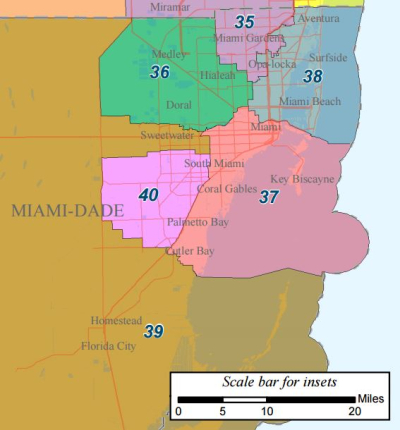 After some re-shuffling this week when Flores' previous Democratic challenger qualified in a neighboring district instead, Democrats were under the gun to find a candidate to put up against Flores in District 39. The deadline for candidates to file for this year's primary and general elections is noon today.

They found one: Debbie Mucarsel-Powell.

Mucarsel-Powell, of Pinecrest, filed her candidacy for District 39 on Thursday, but it doesn't appear - as of 9 a.m. - that her qualifying papers have been processed yet by the Florida Division of Elections. (That's not uncommon; there's usually a lag between when candidates submit their papers and when their affirmed to be "qualified" in the candidate list online.)

According to Miami Herald archives and her LinkedIn page, Mucarsel-Powell was named senior vice president of development at Jackson Health Foundation in November 2014. Before that, she spent more than eight years working at Florida International University -- first as director of development from 2003-2007, then as associate vice president for advancement for FIU's Herbert Wertheim College of Medicine from 2007 to July 2011.

Mucarsel-Powell helps run her own business, D. Mucarsel-Powell & Associates, LLC -- which was registered with the state in 2012. According to state records, she and her husband, Robert Powell, are managers of the business. Mucarsel-Powell's LinkedIn page lists her as current president of the firm, also known as DMP Associates.

The District 39 seat, newly redrawn because of redistricting, leans Democratic and Hispanic. The seat spans western and southern Miami-Dade County and Monroe County, including the Florida Keys.

A write-in candidate, Brent Artz of Big Pine Key, also qualified Thursday. An independent candidate, Sheila Lucas George, filed previously in the race but had not yet qualified as of 9 a.m. today.

Mucarsel-Powell fills the void left by Miami Democrat Andrew Korge, who left the District 39 race on Wednesday for what he viewed as better prospects in District 40, which is in central Miami-Dade County.

A fourth Democrat entered that race on Thursday: Missalys Perez, of Hialeah. (Her qualifying papers have not yet been processed.)

Unless there are any more late-filing candidates today, the winner of that August primary among those four will take on Miami Republican Rep. Frank Artiles in the fall. Independent Mario Jimenez also qualified for the November election.

Korge is under fire this week -- accused of offering Bullard money to move to a different race. Rivas Logan says Korge also approached her last month about swapping races (but offered no money). Both say they declined Korge's offers. Korge denies he offered Bullard "$25,000 cash," but wouldn't say whether he, instead, might have offered campaign help or fundraising support.

Elsewhere in Miami-Dade County, Republican Sen. Rene Garcia, of Hialeah, also drew a last-minute challenger. Until yesterday, he'd been the only candidate to file for the District 36 seat -- which meant he would've been re-elected without opposition.

But Democrat Anabella Grohoski, of Miami Springs, filed her candidacy, setting up a general election campaign.