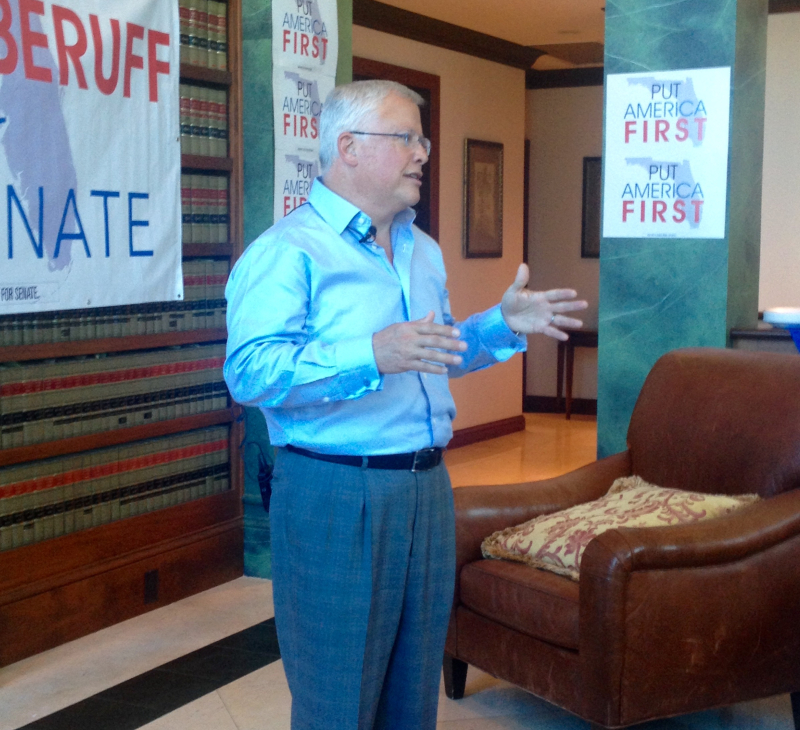 Carlos Beruff may have picked the perfect location on Wednesday to essentially re-launch his campaign for the U.S. Senate, which suddenly requires him to beat an incumbent who just 3 months ago was a top-tier presidential contender.

"This is like a whole new campaign," Beruff told about 30 people at a law office in Panama City on Wednesday just hours after U.S. Sen. Marco Rubio announced he had changed his mind and now wants to seek re-election to the U.S. Senate.

For the last four months, the millionaire land developer from Manatee County was battling four other lesser known Republicans for the GOP nomination to replace Rubio. Already three of those four other opponents have stepped aside for Rubio.

But Beruff told the Republican audience in Bay County Wednesday that he is not budging and will remind voters of how much Rubio has skipped out on doing his job in Congress and how little real world business experience Rubio has.

"When 2.6 million people hire you to do a job, you really should go and do that job; and not go looking for another job," Beruff said of Rubio who missed 73 of 105 votes in the Senate during the six months before dropping out of the presidential race in March.

Beruff had a receptive audience in Bay County, where he's made four stops since March and has just ramped up his television advertising in the area. It's also a county where Rubio won less than 20 percent of the GOP presidential primary vote against Donald Trump and Ted Cruz in March.

Larry Britt, a retired salesman who was among the group to see Beruff, said even with Rubio in the race he still likes Beruff's chances.

"This is the year of the outsider," Britt said.

While Rubio was once the outsider choice, Britt said he thinks Washington has changed him like some of the other Republicans elected over the years who vowed to change D.C. He said those who try to make politics a career end up changing to fit in on Capitol Hill. But since Beruff already has another career, it makes him different and less susceptible to falling in line in D.C.

Beruff drove home a similar theme during a 15 minute speech to the group.

"Mr. Rubio has become part of the establishment," sad Beruff, who has said he's ready to spend up to $20 million of his own money to win the Senate seat.

Attorney William G. Harrison, Jr., said he supported Rubio in 2010, but said his entering the race so late is a problem for him. He said once Rubio made clear he would not seek re-election, he and others took him at his word and started committing to other campaigns. He's told people in his office and over dinners that he's backing Beruff and questions how he can go back on his word, just because Rubio changed his mind.

"It's different for people up here in North Florida where it really matters if you keep your word," Harrison said.

He said Rubio is also going to have to overcome not spending much time in the Florida Panhandle since he was elected in 2010. He said Rubio has barely been west of Tallahassee and hasn't built ties with people.

"Nobody knows who Rubio is here," Harrison said. "Sure we've seen him on tv during the presidential campaign. But around here people know if you have a problem you call Bill Nelson's office and they will take care of it. He's a good guy, but you just don't know who he is. We don't have a connection with him."

During his speech, Beruff seized on that sentiment noting he's already visited all 67 Florida counties and has pledged visit them all again every year if he is elected.