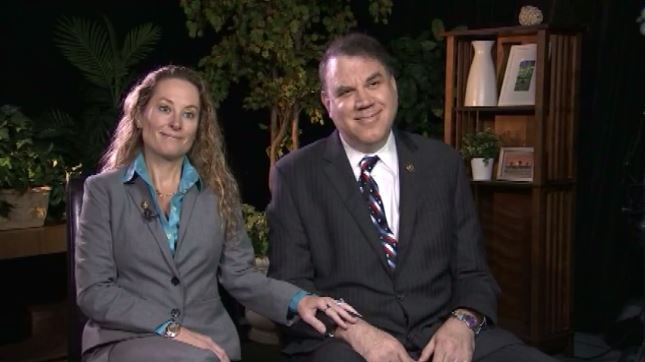 Democratic U.S. Senate candidate Alan Grayson and his new wife, Dr. Dena Grayson (née Minning), have given their first joint interview since getting married over the Memorial Day weekend. Speaking with an Orlando TV station on Thursday, the couple discussed their private ceremony and also responded to questions about whether their wedding was somehow a ploy to keep Alan Grayson's current U.S. House seat in the family.

The marriage gives Dena Grayson -- a political newcomer -- more name recognition in her first political race, running in a contested Democratic primary to replace her new husband in Congress. About a day after their wedding, she changed her social media accounts and campaign website to reflect her new last name, which she acknowledged could give her an edge.

"Yes, it certainly has an impact on the race, but that wasn't our motivation," Dena Grayson told WFTV Channel 9 in Orlando in an interview that the station promoted as the couple's first since their wedding.

Dena Grayson, a biochemist and medical doctor, declared her candidacy for the newly-redrawn 9th Congressional District seat last July, a few weeks after Alan Grayson announced he would forgo re-election to run for U.S. Senate. The couple had reportedly been dating since 2014.

But in the wake of Sunday's wedding, some have speculated that Dena Grayson, if elected, could be simply a place-holder for her husband -- should he lose the August Democratic primary to fellow U.S. Rep. Patrick Murphy and want to seek a return to Congress in two years.

Dena Grayson told WFTV's Chris Heath: "That's certainly not the plan for me or for Alan. My motivations to run for public office are very simple: To serve my local community."

"If we both win, this is the first time that a husband-and-wife team was elected to the Senate and the House," Alan Grayson said, adding later: "If I'm in the Senate and she's in the House, think of the magical things we can do to improve people's lives in Central Florida and around the state."

Watch the full 8-minute interview below: