« After Orlando shooting, Democrats want special legislative session | Main | Lopez-Cantera says he has no new information on what Rubio's next step is »

Orlando leaders: The shooting has been transformational 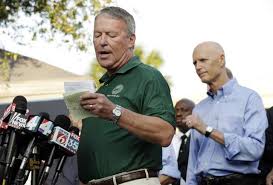 Orlando's mayors said Wednesday that the community response to the shooting has been transformational -- not only pulling the community together with support and resources but also leading people to what they say is a better acceptance of the LGBT community.

"It's hard to say we might find a silver lining in this thing but the way our community has come together and stood united and started thinking about different ways to approach each other,'' said Mayor Buddy Dyer at a press conference on Wednesday.

He noted that at the interdenominational prayer service held at the First Baptist Church of Orlando last night, there were many from the LGBTQ community. "There was a lot of reflection by those who might not have been supportive of that community in the past,'' he said. "There's some healing and I think there's going to be more understanding, more discussion, more willingness to be open and embrace diversity and equality."

"So if there's anything at all that could come good out of this it is the fact that we stand more united than ever and that we are more understanding of each other,'' he said.

"This is an opportunity for us as a community to learn how to care more, how to understand more and I think we owe it to every one of those victims to re-evaluate as a society -- and certainly as a Central Florida society -- how we treat those who think and feel differently than we do,'' she said.

She said the prayer service Tuesday night was "the most dramatic change that I have ever seen in how our churches respond to the LGBT community."

The night before the service at her Catholic Church dedicated its service to the community.

"Sometimes, it's been a little hard to be Catholic to be honest with you but we have a pope who has brought a new light and a new way of thinking,'' she said. "Last night having all those faith-based leaders saying we want to huge and we want to pray for everyone in the LGBT community who are either directly affected or indirectly affected. That's transformational."

The mayors announced the opening of  a Family Assistance Center at the former Citrus Bowl that will includes child and family services, grief counseling, ground transportation and airlines assistance for family members, language translation, legal help, help with funeral arrangements and more.

Dyer started a OneFlorida fund on Tuesday and in its first day had raised $2 million for the victims of families.