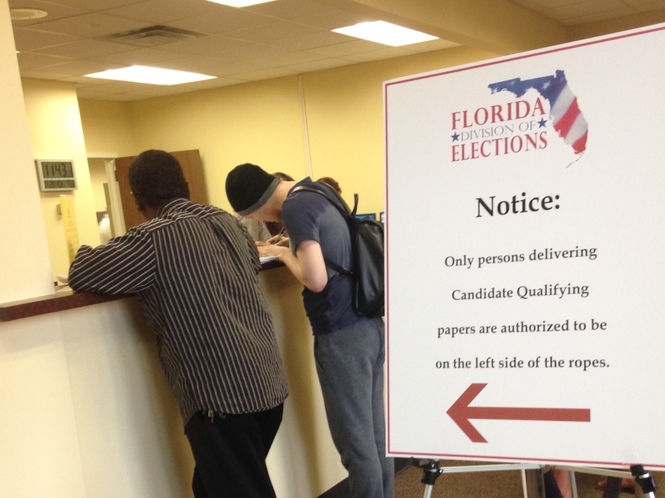 Three main contenders for Florida's U.S. Senate seat have officially secured their positions on the party ballots, and a couple newcomers also staked a claim in the race as the qualifying period for Florida's August primary elections began today.

Democrat Patrick Murphy and Republicans Carlos Beruff and Todd Wilcox all pre-filed their paperwork -- along with a $10,440 check -- earlier this month to qualify for the ballot.

Several other candidates actively campaigning have yet to file -- including several Republicans, and Democrats Alan Grayson and Pam Keith. They have until noon Friday to do so.

The Republican field remains largely in limbo, as uncertainty swirls about whether Sen. Marco Rubio will seek re-election despite promising during his presidential campaign that he would leave the Senate if he lost the March presidential primary.

Rubio has signaled for several weeks a growing change of heart and said last week, in the aftermath of the Orlando shooting, that he was re-considering his pledge to become a private citizen again in 2017. He had said he would take this past weekend to consider his options.

Until he announces his plans, other Republican candidates appear to be biding their time. Lt. Gov. Carlos Lopez-Cantera and U.S. Rep. Ron DeSantis, R-Ponte Vedra Beach, had not filed to qualify, as of this afternoon.

Lopez-Cantera, a close friend of Rubio, said he will step aside if the senator runs again. DeSantis has hinted that he also may leave the race if Rubio runs. U.S. Rep. David Jolly, R-Indian Shores, announced Friday that he will seek re-election to his congressional seat, rather than continuing his Senate campaign.

Luster pre-filed June 10, a few days after he appears to have launched his campaign, and he officially qualified Monday. He was not registered as a candidate with the Federal Election Commission, as of this afternoon.

An aide filed his qualifying papers for him with the Florida Bureau of Elections earlier Monday.

De La Fuente says on his website he lives in Orlando and he listed an Orlando address on his filing paperwork, but his presidential campaign and various public records still place him in San Diego.

He's appeared on some presidential primary ballots this cycle, records show. For instance, De La Fuente got 7,500 votes -- or 0.2 percent support of the 4.6 million ballots cast -- in the California presidential primary on June 7. (He was not on the ballot for Florida's March 15 primary.)

FEC records show his campaign account is still registered for the presidential race. He loaned more than $6 million to that campaign and raised less than $17,000 from supporters, according to the FEC.

Also Monday, Tony Khoury, a Coral Gables resident and self-described businessman in the aviation industry, officially qualified to run in the general election without a party affiliation. He was the first to pre-file for the Senate race on June 6.