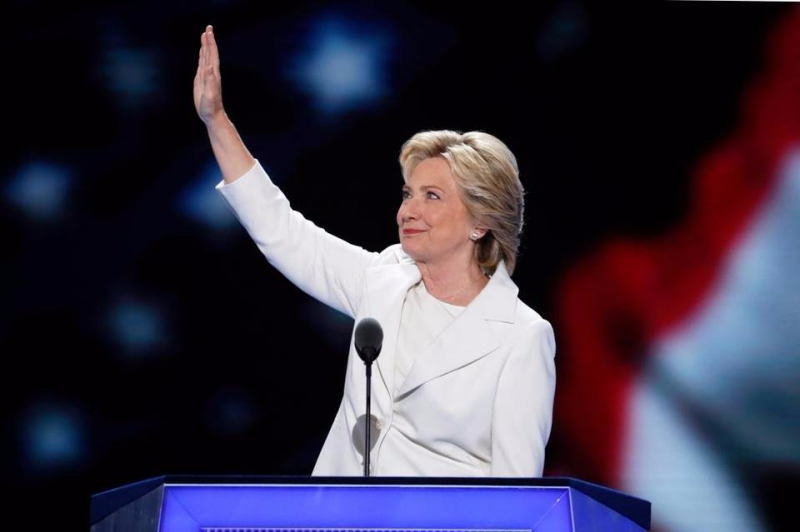 PHILADELPHIA -- After decades wrestling with living in public, Hillary Clinton introduced herself one more time to Americans on Thursday night, no longer as a famous wife, former U.S. senator or Cabinet secretary but as a presidential nominee intent on writing a new, historic chapter in her life — and the country’s.

“It is with humility, determination and boundless confidence in America’s promise that I accept your nomination for the presidency of the United States,” Clinton said. Thousands of delegates at the Democratic National Convention interspersed chants of “Hi-lla-ry” with “His-to-ry.”

Clinton accepted the Democratic Party’s presidential nomination acknowledging that both her party and the country remain deeply split — perhaps more so — eight years after her former rival, Barack Obama, won the White House.

“America is once again at a moment of reckoning. Powerful forces are threatening to pull us apart,” she said. “Bonds of trust and respect are fraying. And just as with our founders, there are no guarantees. It truly is up to us. We have to decide whether we will all work together so we can all rise together.”

Facing Clinton is one of the most difficult challenges in modern politics: succeeding a two-term president of her own party. A self-described unnatural campaigner, Clinton tried to contrast herself and her running mate, Virginia Sen. Tim Kaine, as diametrically different from her unpredictable Republican rival, Donald Trump, whom she portrayed — as Democrats did for four days in Philadelphia — as reckless.

“He wants to divide us from the rest of the world and from each other. He’s betting that the perils of today’s world will blind us to its unlimited promise,” she said. “He’s taken the Republican Party a long way from ‘morning in America’ to midnight in America. He wants us to fear the future and fear each other.”

Then Clinton cited former President Franklin Roosevelt, who “came up with the perfect rebuke to Trump more than 80 years ago, during a much more perilous time.” The crowd joined her: “The only thing we have to fear is fear itself.”

Top Democrats close to Clinton — including her husband, former President Bill Clinton, President Obama, Vice President Joe Biden and First Lady Michelle Obama — spent the week trying to erase what they called a caricature of Clinton with stories of the woman they know. Clinton would be the most disliked presidential candidate ever — if it weren’t for Trump.