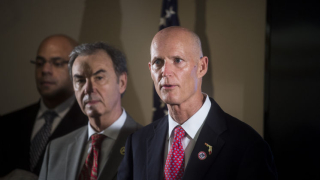 One woman and three men have been infected, and all four live in Miami-Dade or Broward counties. This is believed to be the first time the virus has been spread by mosquitoes within the continental United States.

Under an emergency declaration, Scott already gave the state authority to spend $26.2 million to combat Zika, which has been linked to microcephaly, a birth defect where a baby’s head is smaller than normal.

“If it becomes clear that more resources are needed, we will not hesitate to allocate them,” he said in a statement Friday.

Additionally, Scott and other state leaders announced plans to double down on efforts in South Florida to fight the virus. Among them, the Florida Department of Health will give $620,000 to OneBlood so the blood bank can start testing donations for Zika.

DOH is also expected to take on the load of Zika testing within the area where the state believes the transmissions occurred, a one-square-mile zone north of downtown Miami. The area is bounded by Northwest Fifth Avenue, U.S. Route 1, Northwest/Northeast 38th Street and Northwest/Northeast 20th Street, according to Scott’s office.

“If you live in this area and want to be tested, I urge you to contact the county health department, which stands ready to assist you,” Scott said.

Scott compared the state’s preparation for Zika to that of a hurricane, a call he’s echoed since first declaring a public health emergency in February.

Commissioner of Agriculture Adam Putnam ordered more aggressive mosquito spraying within 200 yards of the four patients’ homes for 45 days in a declaration Friday.

The state will direct $1.28 million to the mosquito control districts in Miami-Dade and Broward counties through December, according to Scott’s office.

“Floridians can do their part by draining standing water surrounding their homes, as it can serve as breeding grounds for the mosquitoes that are capable of transmitting the virus,” Putnam said in a statement.

Though these cases are being called likely local transmissions, no Florida mosquitoes have tested positive for Zika, Scott said, but DOH is testing “aggressively” to rule out other cases.

Friday morning, DOH announced three more travel-related cases of Zika in Miami-Dade County. The state has confirmed 386 cases of Zika related to travel, in addition to those that likely were contracted in Florida.

The epicenter of the virus’ spread is South Florida. Ninety-nine travel-related cases have been confirmed in Miami-Dade and 55 in Broward counties. Ten are confirmed in Hillsborough and seven in Pinellas.