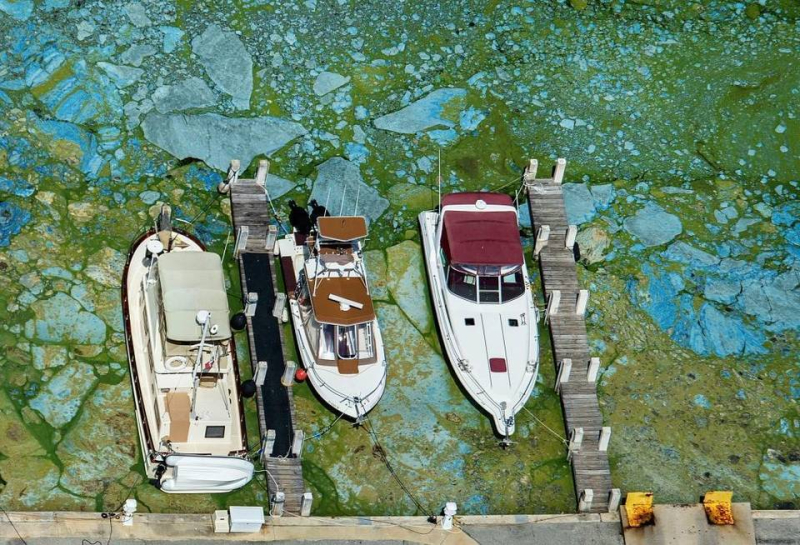 Faced with an environmental disaster now attracting international headlines, Gov. Rick Scott on Wednesday announced he will seek "additional funding" in his budget next year aimed at replacing leaking septic tanks that are believed to be one of the sources of the polluted run-off causing the outbreak of blue-green algae coating the coastlines of Martin and St. Lucie counties.

Scott did not specify the amount of taxpayer money he is willing to seek to stem the pollution that has led to a stinky toxic sludge coming from the Indian River Lagoon and Caloosahatchee River. The governor said his proposal will include new funding for a 50/50 matching grant program "with local communities surrounding the water bodies affected by algae blooms resulting from the frequent discharges of Lake Okeechobee."

The governor's press release said it would be a voluntary program designed "to encourage people to move from septic tanks to sewer systems" but he made no mention of requiring any change to water quality standards imposed on sugar-cane and other farmers whose land has also been cited as the source of the polluted run-off.

For years, septic tank run-off has been identified as a major problem contributing to the pollution in the state's waterways in springs. After years of effort, environmentally-conscious lawmakers passed a bill in 2010 requiring the inspections of all 2.6 million septic tanks every five years and they banned the land application of septic tank waste.

In 2011, the Legislature and the governor repealed the requirement on septic tank inspections and in 2012 lawmakers delayed the ban on septic tank waste. Now, septic tank owners aren't required to have their systems inspected unless their current septic tank is modified or replaced and public health officials say they do not know how many septic tanks are failing in Florida.

Meanwhile, a 2012 study by the Everglades Foundation concluded that 76 percent of the phosphorus entering the Everglades comes from agricultural lands south of Lake Okeechobee but the agricultural polluters were paying only $200 million -- or 24 percent -- of their share of the clean-up costs.

Scott has steered blame to the Army Corps of Engineers, which has managed the water levels of Lake Okeechobee by releasing billions of gallons of water polluted from agricultural back-pumping and ground water runoff into the St. Lucie Canal and the Caloosahatchee River.

Scott argues that the discharge is needed to keep water levels low in the lake because the federal government failed to strengthen the Hoover Dike but environmentalists say that reason is too simplistic, arguing that higher water levels could also do damage to the lake's fragile ecosystem.

“Every day, millions of gallons of water continue to be discharged into the St. Lucie and Caloosahatchee estuaries by the U.S. Army Corps. of Engineers after years of the federal government failing to repair the federally operated Herbert Hoover Dike,'' Scott said in the statement.

"While the state has continued to step up and invest in important restoration projects to help South Florida waterways, it is clear that more work has to be done.  It is up to all of us – the state, Florida’s local communities and the federal government – to work together on long term solutions to improve the quality of our water."