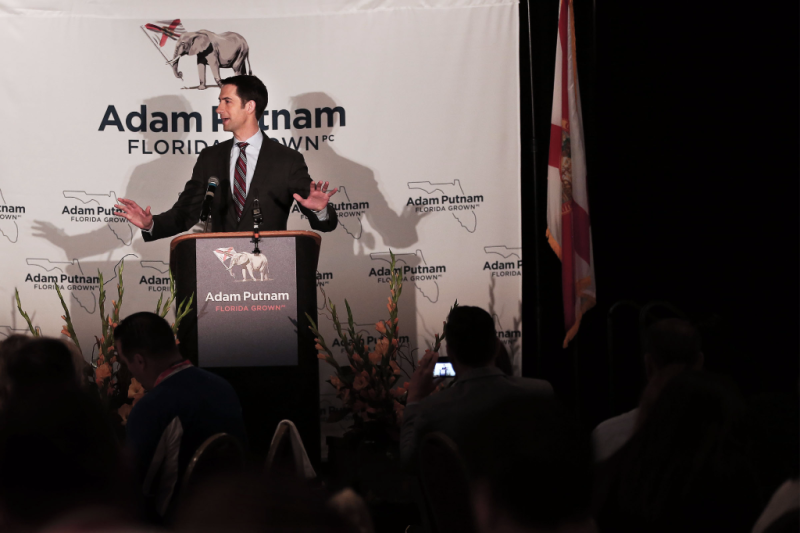 INDEPENDENCE, Ohio -- U.S. Sen. Tom Cotton of Arkansas, a potential GOP presidential candidate in four or eight years, steered clear of mentioning presumptive 2016 nominee Donald Trump at a Tuesday breakfast with Florida convention delegates. But he did name another Republican, one far well known and seeking a much more modest seat: John Couriel.

Couriel is running for Florida House seat 114 in central Miami-Dade County. Couriel, who ran for state Senate and lost in 2012, also happens to be know Cotton from when they were students. Both graduated from Harvard College and Harvard Law School.

"John is a very good man," Cotton said. "I'm very excited that he's running again, and I hope that the people of South Florida choose to elect him this year, because he'll be a tireless advocate for them in the state Legislature."

Couriel told the Miami Herald in a message he "didn't have a closer friend in college or law school than Tom."

"Fatefully, we were sitting together in Charlie Nesson's evidence class on 9/11," Couriel said. Cotton attended Couriel's Key West wedding, and Couriel and his wife sent Cotton care packages when Cotton -- after the terror attacks of Sept. 11, 2001 -- joined the Army and served in Iraq and Afghanistan.

Cotton, one of the prime-time convention speakers Monday night, said he'll campaign for Couriel and other Republicans in Florida in the fall. He dismissed chatter about his own future presidential ambitions: "The future's a long way away."

"We don't even have nominees this year yet," he said. "This is a rare occasion for Republicans from all 50 states to get together," he added, asked about his appearances before swing-state delegations like Florida and Ohio. "I'm the senator from Arkansas, but I can't serve Arkansas as effectvely in a Democrat-controlled Senate as I can in a Republican Senate."