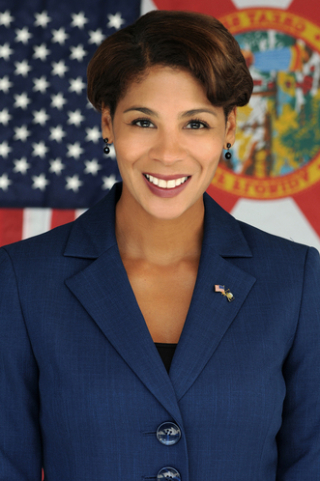 The lone African American woman seeking Florida's U.S. Senate seat this year is accusing an Orlando TV station of "blatant racism and sexism" for its decision to exclude her from an upcoming Democratic primary debate.

In a statement to the Herald/Times late Tuesday, Miami labor attorney and former naval officer Pam Keith blasted WFTV Channel 9 for "colluding" with leading Democratic candidates Patrick Murphy and Alan Grayson to arrange what the station said will be a "one-on-one" debate between the two sitting U.S. congressmen.

"Essentially, WFTV wants to ensure that all voters, but especially women, African American and Hispanic voters, remain ignorant of any candidates other than the two wealthy white men they seek to promote," Keith said.

The televised debate is scheduled to air Aug. 12 and will likely be the only Democratic U.S. Senate debate ahead of the Aug. 30 primary.

WFTV told the Herald/Times earlier Tuesday that it invited just Grayson and Murphy to participate because they were the only two candidates that met the station's criteria: a showing of at least 15 percent in statewide polls. Such a threshold is common for organized political debates.

Keith has been campaigning for about 20 months -- longer than any other candidate from either major party -- but she's still an underdog. Most polls haven't included her. In News 13 / Bay News 9 polls in March and in June, Keith got 11 percent and 10 percent support, respectively.

Keith called it "an offense and a disgrace" for WFTV and for her political opponents to intentionally leave her out, and she said the result is "an utter debasement of voters of color."

Here is her statement in full:

The idea of a news outlet reaching "agreement" with two candidates to exclude one of their opponents from a debate is, in an of itself, obscene. Media outlets must never allow themselves to become extensions of political campaigns or to be used to advance political objectives. It cheapens the media's role in informing the public.

But in this case, the collusion is even more distasteful because of the blatant racism and sexism involved therein. Not only have they colluded to keep me out of this debate, but to keep all candidates of color out of the debate. As disrespectful as that is to the candidates themselves, it is an utter debasement of voters of color. Essentially, WFTV wants to ensure that all voters, but especially women, African American and Hispanic voters, remain ignorant of any candidates other than the two wealthy white men they seek to promote. It is an offense and disgrace. People of color make up more than half of the Democratic electorate, and women are more than 50% of the vote. To treat those voters, who may have a particular interest in a woman candidate or candidates of color, as inconsequential is beyond belief.

We have asked WFTV for a response to Keith's statement and will update this post if the station wants to comment.

The station said Tuesday that other Senate candidates, Democrats and Republicans, would be invited to do 3-minute segments "to communicate their stance on the issues to the people of Central Florida."

Keith isn't the only Democrat to be excluded from WFTV's debate. Reginald Luster of Jacksonville and "Rocky" Roque De La Fuente of Orlando also weren't invited. They each launched their campaigns last month -- just in time to qualify for the primary ballot -- and neither has been included in any polls.