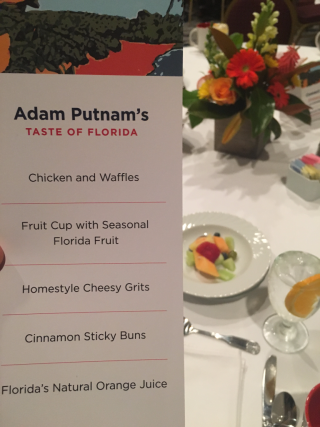 INDEPENDENCE, Ohio -- The Republican race for Florida governor in 2018 began, as successful courtships often do, through the stomach.

Agriculture Commissioner Adam Putnam served up a crowd-pleasing breakfast of chicken and waffles, cheesy grits and -- of course -- Florida orange juice -- for delegates at the Republican National Convention on Tuesday. The grub (and the drinks, mimosas and Bloody Marys) came with big-name GOP guests -- and the unwritten acknowledgment that Putnam intends to be on the next midterm-election ballot.

Not that he admitted to it.

"We're having a wonderful time as Commissioner of Agriculture and focused on one election at a time," he told reporters, using the royal "we" often employed by well-versed political candidates.

He didn't have to announce his plans, though. Everyone in the room at the Embassy Suites-Rockside in the Cleveland suburbs was in on them.

"It sort of laid the foundation of what his intentions are -- as if everyone in Florida didn't know," said state Rep. Jeanette Nuñez of Miami. "He definitely ventured from the confines of agriculture!"

The only time Putnam talked about agriculture was when he joked about the breakfast spread, several notches above the average hotel intercontinental buffet.

"I know that a number of you were partying like Republicans last night -- actually partying like Democrats," he told attendees. "Now you're paying for it. You can drink your vegetables here at the Bloody Mary bar. It may not be Florida-grown, but it's Florida-inspired."

Instead, Putnam portrayed Florida a state other people dream about living in -- which he attributed to years of Republican control in Tallahassee. Under prior Democratic rule, he contended, the state was "turning prisoners loose after serving 33 percent of their sentence."

"The economy was in the tank, and we had more and more regulations stacked onto one another," he said. "We're always one election away from that. That's why these campaigns count: because Illinois and New York and even Ohio, as hard as they're trying to dig out from the hole they've been put in  -- and, heaven knows, California -- I mean, they're lost causes.

In addition to presenting what sounded very much like a campaign argument, Putnam praised the activists in the room whom he would need in order to get elected. And he spent four minutes rattling off names of other elected Republicans in the room, including retiring U.S. Rep. Jeff Miller. ("He likes in Chumuckla. It's a metropolis. Makes Bartow look big!")

"I make these introductions to say that this is a team. This is a conservative team," Putnam said. "We win as a team, we lose as a team."

He made no mention of Republican Gov. Rick Scott. And he didn't include presumptive presidential nominee Donald Trump in his remarks, either, though he later spoke about him to reporters.

"I hope to hear from Donald Trump a vision for how we can bring America together and keep America safe," said Putnam, who has said he will vote for Trump. (The music playing in the background, coincidentally? The Beatles' "Come Together." Really.)

He wouldn't bite on criticizing some of the more unusual moments of the first night of the convention, such as delegates mounting a brief revolt over a rules vote.

"You guys can't have it both ways," Putnam chided reporters. "You bemoan the sterile, scripted conventions, and then you get a very unscripted moment yesterday, and you're complaining about that. This is anything but a conventional convention."

He was more chatty -- though not particularly revealing -- about Trump's running mate, Indiana Gov. Mike Pence, who like Putnam was elected to Congress in 2000.

"Well, um, it'd be about 180 degrees different," Putnam said. "Mike Pence is a level, steady, consistent guy who is a well-read conservative, rooted in sort of the founding, philosophical documents of conservatism."