As of Tuesday morning, requests totaled 2,185,397. Nearly half of the requests (about 978,000) were from Republicans, and 819,000 were from Democrats, with most of the rest from voters with no party affiliation. 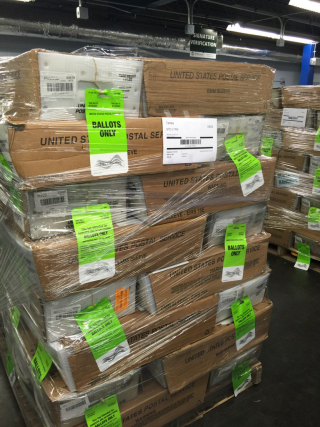 Election supervisors took to social media to show huge stacks of ballots headed to mailboxes. Hillsborough Supervisor of Elections Craig Latimer posted a photo on Twitter of one of eight pallets (left) and said all voters will get "I Voted!" stickers with their ballots. An 18-wheeler parked outside Broward Supervisor Brenda Snipes' voting equipment center in Lauderhill was ready to truck nearly 144,000 ballots to a post office in Opa-locka, and Snipes posted a video of ballots on the move.

The big pre-primary push is nothing compared to what will happen in advance of the November general election, Pasco Supervisor of Elections Brian Corley predicted on Twitter: "I anticipate a huge spike in new requests (after) the 8/30 primary whern focus switches to the general!"

The 2016 primary ballot will be unusually long for a primary in some areas because of the multitude of contested races and grass-roots elections for state committee members of the two major parties.

All voters, regardless of party, can cast ballots in nonpartisan races such as for school board and judgeships. They also can vote on a proposed constitutional amendment that would exempt renewable energy devices on commercial property from property taxes for 20 years. That exemption already exists for residential property.

Voter turnnouts in past statewide primaries have hovered at or slightly above the 20 percent mark. But across the state, elections officials have intensified their outreach efforts to encourage more people to vote by mail. Voters can request a mail ballot until Aug. 24, and the last day to register to vote to be able to cast a primary ballot is next Monday, Aug. 1.