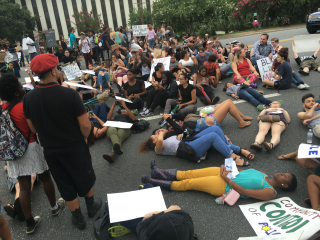 Protesters opposing police violence took their fight to the steps of Florida’s Historic Capitol and blocked Tallahassee’s main thoroughfare Tuesday evening amid cries of “Black lives matter” and “No justice, no peace, no racist police.”

The rally was organized by Tallahassee Students for a Democratic Society in response to the shootings of Alton Sterling and Philando Castile, two black men, at the hands of police in Baton Rouge, La., and Falcon Heights, Minn., last week.

“People still have this conception that the police are here to protect us, that they have our best interests at heart,” Katherine Draken, a senior from Tallahassee, told the group as it gathered on the Florida State University campus. “Their function still is to enforce the racist, white supremacist system that exists.”

More than an hour and a mile later, the group of about 200 arrived in front of the state Capitol and moved into the center of Monroe Street, blocking traffic.

There, they lay in the street.

Capt. Jason Laursen of the Tallahassee Police Department asked one of the protest’s organizers, FSU senior Regina Joseph, to move everyone out of the street.

Grabbing a megaphone, she called out to the group:

Someone called back: “So is killing black people!”

“The police,” Joseph said, “they’re not our friends.”

The march came as tensions have risen nationwide between activists and police. The deaths of Sterling and Castile provoked outcries from Black Lives Matter and other minority-rights groups nationwide.

Before the Tallahassee marchers embarked from their starting place — a statue on FSU’s campus called “Integration” — two officers from the FSU Police Department offered to escort them. Joseph declined.

Still, officers from FSU and Tallahassee police departments followed the group and blocked cross streets so they could pass down the center of the road as the group wound its way across campus and ultimately to the Capitol. 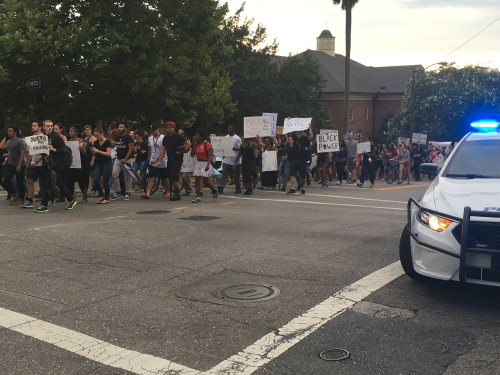 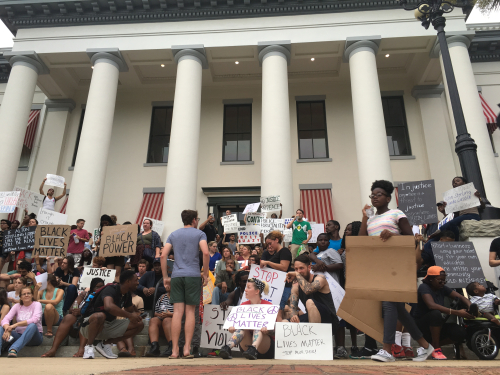