« Fact-checking the first night of Democratic convention | Main | Trump on U.S. without his SCOTUS picks: 'This is Venezuela' »

'The choice is not even close,' Sanders says of Clinton 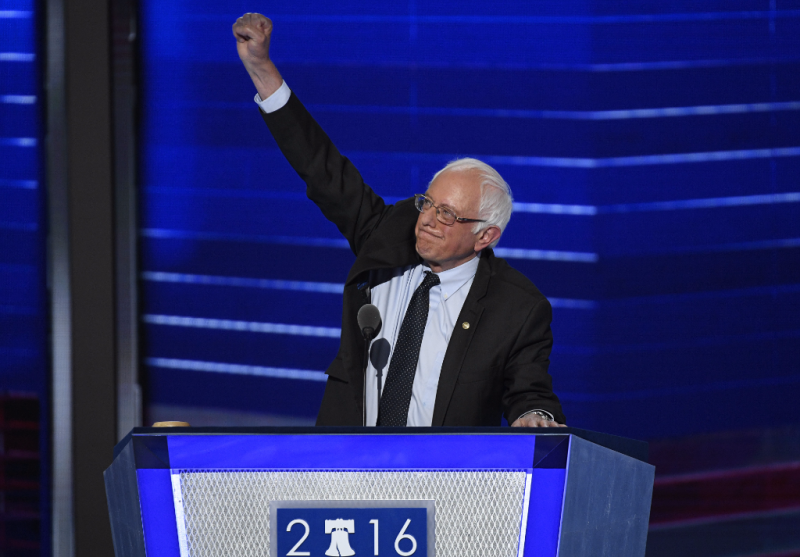 PHILADELPHIA -- In a rousing speech Monday night, Democratic presidential runner-up Bernie Sanders tried to rally his political party to the progressive agenda that endeared him to millions of primary voters — while also urging the party to unite behind the woman he lost to, Hillary Clinton.

“This election is not about, and has never been about, Hillary Clinton, or Donald Trump, or Bernie Sanders or any of the other candidates who sought the presidency,” he said. “This election is about — and must be about — the needs of the American people and the kind of future we create for our children and grandchildren.”

Sanders was the most anticipated speaker of the first night of the Democratic National Convention — not only because he took the microphone last, but because it came at the end of a day full of discord stirred by some of his supporters, who are still reluctant to accept Clinton’s coming nomination.

“We need leadership in this country which will improve the lives of working families, the children, the elderly, the sick and the poor. We need leadership which brings our people together and makes us stronger — not leadership which insults Latinos, Muslims, women, African Americans and veterans — and divides us up,” Sanders said. “By these measures, any objective observer will conclude that — based on her ideas and her leadership — Hillary Clinton must become the next president of the United States. The choice is not even close.”

Unlike his remarks to supporters earlier in the day — also attempting to smooth hard feelings — this time, on the floor of Philadelphia’s Wells Fargo Arena, Sanders didn’t get booed. He did get interrupted, with chants of “We want Bernie!”

“He’s with her!” Clinton fans counter-chanted after Sanders’ speech.