Conservative business groups and liberal environmental interests seldom see eye-to-eye in Tallahassee, but they are united in supporting Amendment 4 on Florida's statewide primary ballot. The ballot question, pushed by the Legislature, would create an exemption from sales taxes and tangible personal property taxes for businesses that add solar panels.

Groups promoting Amendment 4 include the Florida Retail Federation, Florida Restaurant and Lodging Association, Nature Conservancy, Florida Conservation Voters and Florida Chamber of Commerce, all of whom appeared at a press conference Thursday.

"We brought the Baptists and the bootleggers together," said Sen. Jeff Brandes, R-St. Petersburg. 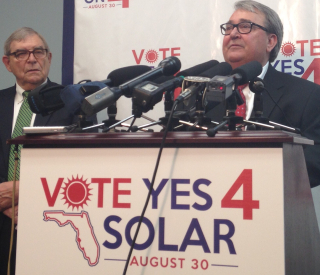 Richard Turner (at podium at left), general counsel of the restaurant and lodging group, said the more than 14,000 hotels in the association would consider adding solar panels to their rooftops if they could avoid taxes on them. "This would allow more solar power," Turner said.

Randy Miller of the Florida Retail Federation, representing 270,000 retailers, said Amendment 4 would "bring down the barriers" that limit solar energy investment in Florida.

More than 2.5 million Florida voters are expected to cast ballots in the Aug. 30 primary, based on a turnout projection of 20 to 22 percent. All voters can vote on Amendment 4, and 60 percent of them have to vote yes for it to be added to the Constitution. If it passes, the Legislature will have to pass a law to implement it.

Amendment 4 is on the low-turnout primary ballot at the direction of utility companies that didn't want to sow confusion with a separate, business-backed solar question, known as Amendment 1, that will be on the Nov. 8 general election ballot.