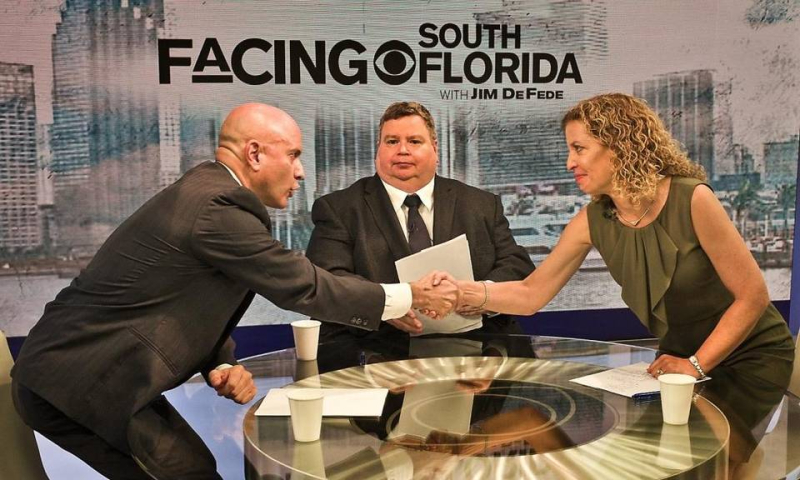 U.S. Rep. Debbie Wasserman Schultz is ahead of Tim Canova by 10 percentage points, according to a new Sun Sentinel/Florida Atlantic University poll.

"It's a little tighter than you would expect in a primary of an incumbent, a well-financed Democrat but this is an unusual race with a little bit more of a national focus," FAU political scientist Kevin Wagner told the Miami Herald.

For Canova to win, he will have to drive up turnout among younger voters but typically older Americans vote more often.

"Barack Obama turned out much younger voters at a higher rate than historically expected," Wagner said. "It's hard to say in a single congressional district if you could repeat that younger person turnout."

Obama endorsed Wasserman Schultz and Clinton campaigned for her in South Florida -- as did Vice President Joe Biden. Sanders endorsed Canova, a first-time candidate and Nova Southeastern University law professor. Clinton won the district with 68 percent of the vote in the March 15 presidential primary.

"Barack Obama is relatively popular there among the Democrats, as is Hillary Clinton. That support translates pretty well" for Wasserman Schultz, Wagner told the Sun Sentinel. "A candidate like Canova who is challenging the system "would probably do better in a district that is more dissatisfied with the Democratic leadership."

Canova's campaign got a boost in donations and media attention in July after Wasserman Schultz stepped down as Democratic National Committee chair after WikiLeaks published thousands of DNC emails. Those emails showed that the DNC favored Clinton over Sanders -- something Wasserman Schultz had denied for months.

After Wasserman Schultz came out in favor of the Iran nuclear deal in 2015, there were questions about whether it would cost her Jewish support in the district -- one of the most heavily Jewish districts in Florida. The poll found that 43 percent of likely Democratic voters back the deal, 17 percent oppose, 31 percent undecided and 9 percent never heard of it.

The poll of 400 likely voters was done Wednesday to Friday and has a margin of error of 5 percent.

This is the first poll in the race done by a media outlet. A poll done by Canova's campaign showed that he was eight points behind but that 60 percent of voters don't know him while a poll by a PAC supporting Wasserman Schultz showed she is 33 points ahead.

The Democrats are competing in the Aug. 30 primary but voting by mail and early voting has already started.