Gov. Scott has already voted, but he won't say for whom 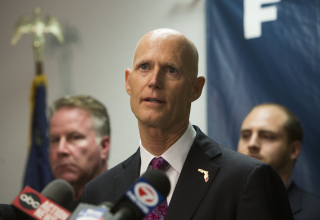 Increasingly, Florida voters are choosing to avoid their neighborhood polling place on Election Day and cast a ballot early or by mail.

Among them is Gov. Rick Scott.

He voted by mail-in ballot for the Aug. 30 primary election. Early in-person voting begins across the state this week and has already started in some counties, including Hillsborough.

But the governor is keeping quiet who he voted for, including in a Republican primary for the U.S. Senate that's pitting Sen. Marco Rubio against Bradenton developer Carlos Beruff, who is close with Scott.

Several Scott confidantes and former staffers are involved in Beruff's campaign, including Melissa Stone, the governor's former chief of staff who managed his 2014 reelection.