« Clinton reserves millions in air time in Florida | Main | Annette Taddeo flubs claim of who paid for oppo research on Joe Garcia. It was her -- not the DCCC »

Is Marco Rubio looking past primary too much? Calls it 'practice' during campaign stop 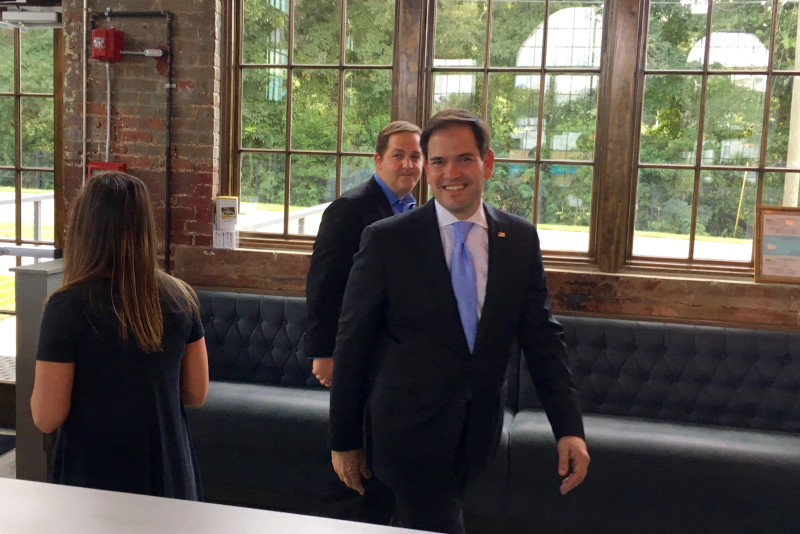 U.S. Sen. Marco Rubio spent most of a 10 minute campaign speech to supporters in Tallahassee urging them to get out to vote in November, scantily mentioning he was even being challenged in a Republican primary eight days from today.

“If you do your part and I do mine, we’ll win in November, we’ll keep the majority in the Senate,” Rubio said.

The majority of the speech was about how, if Republicans do not keep the majority, U.S. Sen. Chuck Schumer, D-N.Y., would dictate public policy debates and vastly improve the chances that the next Supreme Court appointment will be nothing like the late Justice Antonin Scalia, who died suddenly earlier this year.

Then in the final 30 seconds of his speech, Rubio squeezed in a request for votes in the Aug. 30 primary.

“If you haven’t voted already, I need you to vote in the primary,” Rubio said. “We’ve got to practice.”

After the event, Rubio said he wasn’t saying his opponent or the primary was practice, but that it was practice for getting voters out to the polls.

“We don’t take anything for granted,” Rubio said.

Rubio is running in the Aug. 30 Republican Primary against Manatee County homebuilder Carlos Beruff, who has spent about $10 million of his own money in a bid to win the seat.

Beruff's campaign has repeatedly charged Rubio with avoiding debates and trying to look past the primary.

Rubio also recounted to the 60 people at the Tallahassee event why he decided to run for the Senate again, when he initially said he wouldn’t. He told them he was content on becoming a private citizen after he lost the presidential race, but became increasingly concerned that Democrats would win Florida’s U.S. Senate seat if he did not run.

“If I didn’t run our chances of losing the seat were very high,” Rubio said. “I thought that was too big of a price to pay.”

Rubio said Schumer in that slot worried him on many public policy issues, but singled out the fact that with a Democratic majority, the next Supreme Court justice will be nothing like Scalia.

“For me this was not an acceptable outcome and I could not be at peace going home and knowing I could have done something about it,” Rubio said.

But Rubio warned he’s not expecting an easy re-election, while avoiding mentioning either of his potential Democratic rivals - U.S. Reps Patrick Murphy or Alan Grayson - by name.

“Florida is a competitive state,” Rubio said, noting that President Barack Obama won the state by less than 80,000 voters. “No matter what we do it’s going to be close.”