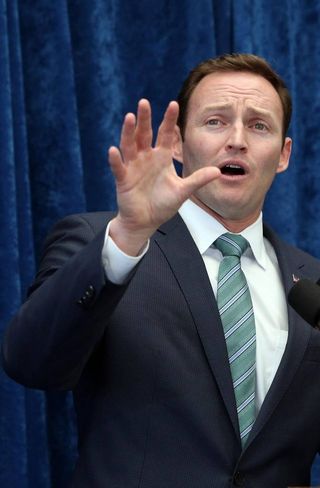 Democratic U.S. Senate candidate Patrick Murphy took in about $1 million between July 1 and Aug. 10 and went on a spending spree during those five and half weeks that reduced his cash on hand by about half.

Murphy reported spending $4.2 million in the pre-primary period -- leaving him with about $4 million available to spend heading in to the home stretch of the Aug. 30 primary, a new FEC filing shows. (He had entered July with $7.2 million in the bank.)

The fundraising figures allow him to maintain a strong financial advantage over his Democratic primary opponents but leave him trailing the Republican favorite, incumbent Sen. Marco Rubio, if both should advance to the general election as they're likely to.

Rubio -- who declared his re-election bid in late June -- raised more than triple what Murphy did during the pre-primary period and came out several hundred thousand dollars ahead in cash on hand. Rubio reported raising $3.2 million and having nearly $4.7 million in the bank, as of Aug. 10, according to his latest FEC report.

Murphy, a congressman from Jupiter, is viewed as the front-runner in the Democratic primary against Pam Keith, a Miami labor attorney and former naval officer, and fellow U.S. Rep. Alan Grayson.

Murphy's campaign has been buoyed by consistently strong fundraising and high-profile endorsements from the Democratic establishment. In the latter half of the summer, he's largely ignored his primary competitors and focused his message on Rubio -- indicating Murphy's confidence that he has the Aug. 30 election in the bag.

Another sign? Murphy's campaign said in a statement today that it had pre-paid more than $800,000 worth of TV advertising for the fall in preparation for challenging Rubio, who's expected to easily win his primary against challenger Carlos Beruff.

Most of Murphy's expenses reported in the pre-primary period were for TV time. The FEC report showed several ad buy payments to Screen Strategies Media, totaling more than $3.1 million since mid-July.

Of the $1 million Murphy took in last period, $78,000 came by way of transfers from joint fundraising committees, which are aiding Murphy's campaign. Of the $918,000 his campaign raised on its own, $43,000 came from special interest group, the FEC report showed.

By comparison, Rubio spent just $582,000 in the pre-primary period. Of the $3.2 million Rubio raised in that time, $334,000 came from special interest groups and $39,000 was transferred from joint fundraising committees.

Both Murphy and Rubio also have independent super PACs aiding their Senate campaigns. Super PACs are barred from coordinating with candidates' campaigns and aren't subject to contribution limits.

A super PAC supporting Rubio raked in $1.7 million ahead of the primary, more than half of which came from contributions gifted from a super PAC that previously supported Rubio's presidential run.