« Trump campaign chief was once registered to vote in Miami — but never did | Main | RNC chairman criticizes Kaine's 'dirty, deplorable attacks' in Tallahassee » 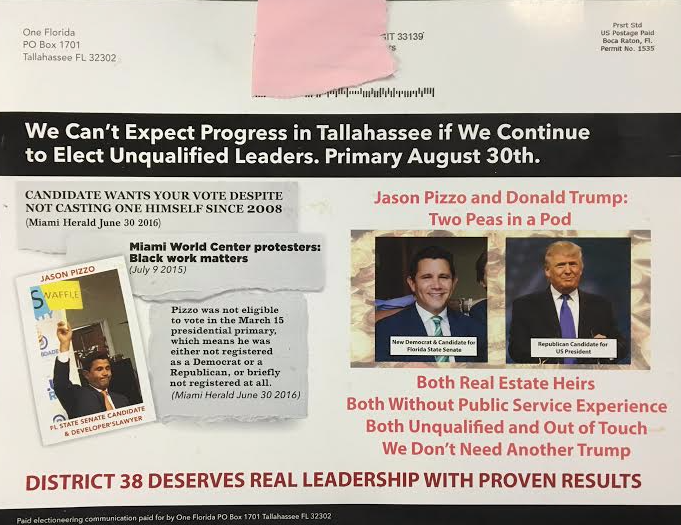 In one Miami race, a Democrat is using Donald Trump as a bogeyman -- on another Democrat.

A mailer comparing Democratic state senate candidate Jason Pizzo to Trump was funded by a group with ties to Pizzo rival Michael Góngora.

The group behind the mailer, an electioneering communications organization called One Florida, received a $10,520 contribution from a defunct entity called A Better Miami Beach, state records show.

A Better Miami Beach was disbanded June 30, and the entity had until July 8 to file its final report, according to state records.

But One Florida received the contribution from A Better Miami Beach on Aug. 3. It's unclear why a supposedly defunct entity was giving to an active political organization.

"It goes to show how desperate Michael Góngora is in the final days of the campaign," Pizzo campaign consultant Christian Ulvert said.

Ulvert referred to the contribution from A Better Miami Beach as "questionable" and "likely illegal."

One Florida was established in June, shortly after Góngora announced his plans to run for Florida Senate.

Asked about the potential funding source for the mailer on Friday evening, Góngora responded, "I have no idea."

"I don't know the inner workings of the organization," Góngora said. "I don't know the mailer but it seems to be factual, seems pretty in line with what wealthy candidates in Florida seem to be doing."

Góngora signed a statement of solicitation in June indicating One Florida was working on behalf of his candidacy.

The ad refers to Pizzo and Trump as "two peas in a pod" and says they are "both real estate heirs without public service experience." It also refers to Pizzo declining to vote since 2008 and switching to the Democratic Party in recent months.

Tallahasse lawyer Mark Herron, the registered agent for One Florida and A Better Miami Beach, did not return a request for comment. 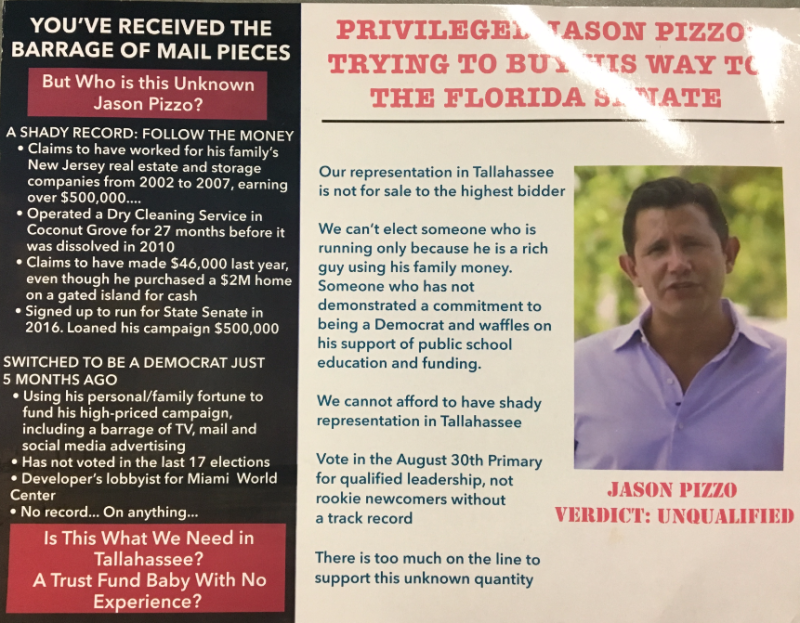