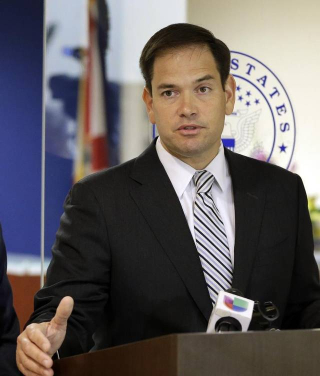 Those are the words Rubio used to describe Murphy during an interview with John Hinderaker on "The Laura Ingraham Show." They are some of Rubio's harshest descriptions to date of Murphy -- the leading Democrat in the Aug. 30 primary for U.S. Senate.

For his part, Murphy, a congressman from Jupiter, has been directly attacking Rubio for weeks -- emphasizing Rubio's poor attendance record in the Senate and his support for Republican presidential nominee Donald Trump. Both Rubio and Murphy have largely ignored their primary opponents.

"Alan Grayson, as I've said before, is not well," Rubio said. "I don't say this lightly because it's a term that's thrown around loosely -- but Alan Grayson is an unstable person."

Rubio then laid into Murphy at length -- attacking his work ethic, his affluent upbringing, his voting record, and for embellishing his resume.

"Patrick Murphy is an unreliable person," Rubio said. "He’s lazy; he’s not a very hard worker. He’s not a guy that you can see his campaign. He barely does events, he kind of just is phoning it in, and I think he feels entitled to it."

On Murphy's family wealth, Rubio said of Murphy: "He’s a very privileged guy. His whole life his family has provided for him. He’s never had to worry a single moment of his life about how to pay his bills or where his next money is going to come from. His dad, in fact, gave him $5 million after he was elected to the Congress."

That $5 million was actually stock in the family business, Coastal Construction Group, which Murphy reported in financial disclosures as ranging from $1 million to $5 million.

Rubio said Murphy's voting record was "atrocious," because he supports issues such as the Iran deal and closing the prison at Guantanamo Bay.

"He would be a rubber stamp for, God forbid, a Clinton presidency," Rubio said.

On Murphy's resume inflating, Rubio said: "This is a guy who’s lied repeatedly. He has no real achievements in his life, and so he’s made them all up."

Rubio incorrectly says Murphy "isn't" a certified public accountant and "wasn't" a small business owner. Murphy technically is and was, respectively, but there are nuances to how he's described those experiences. Politifact reviewed the issue and found Murphy has, at times, omitted a full explanation of his credentials.

Murphy also previously incorrectly claimed he had two degrees from the University of Miami, when he only has one. (His campaign called it an "inadvertent error.")

In response to Rubio's comments today, Murphy spokeswoman Galia Slayen said in a prepared statement: "Of course Marco Rubio is going to do or say anything to distract from his disastrous record as a senator."

"Rubio is the laziest senator in Washington, a politician who puts himself first and blows off the job Floridians elected him to do — while Patrick Murphy has a lifetime voting record of 97 percent. Rubio earned the worst attendance record of a Florida Senator in nearly 50 years, and won't even commit to serving a full term," Slayen said. "In November, Floridians will vote for Patrick Murphy because they know he is committed to working hard for them — not himself."