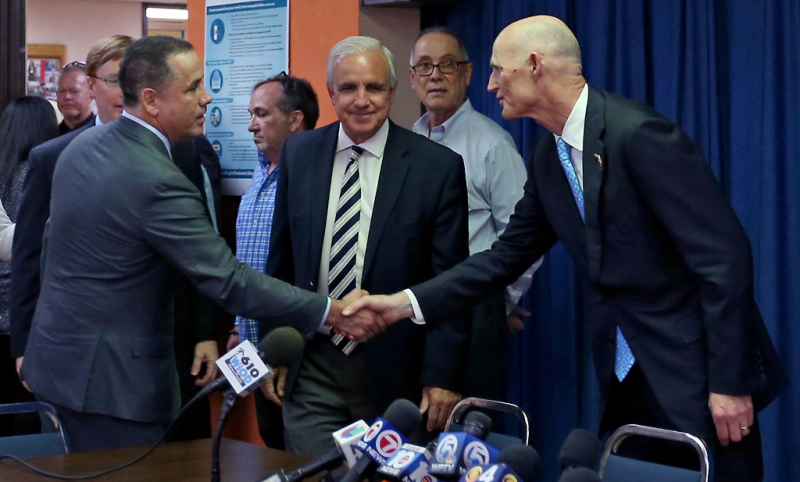 "The governor made, I believe, a big mistake by not believing the folks that are on the ground -- myself, [Miami-Dade County] Mayor [Carlos] Gimenez -- informing us, telling us what he knows," Levine told reporters at a news conference.

"This issue is serious," Levine continued. "To play politics with people's lives is wrong, and there's no place for that. Information must be timely. It must be coming out."

Levine, a Democrat who wants Scott's job, had insisted to reporters Thursday night that Miami Beach had no confirmed Zika cases -- even after the Miami Herald and later other news media reported otherwise, citing sources inside the Florida Department of Health.

The next day, Republican Gov. Scott traveled to Miami to announce the new Zika cases on the Beach, making Levine look like he was either uninformed or more interested in protecting the city's tourism business.

Levine, who has taken to cable TV and radio interviews to defend himself, maintained to reporters that he wasn't spinning a positive business message but rather relaying the limited information he had received from the state.

"We're all about transparency. What we know, we tell the media," he said, arguing it would have been worse for his office to remain silent. "What we were hearing is specifically two unconfirmed cases. Unfortunately we had to go out and tell the public that. The following day we learned new information.

"If the governor had reached out to me, or reached out to the county mayor -- I heard he couldn't reach me," Levine said. "I seem to be reachable by the press, the media. We have a pretty massive staff. I'm a pretty much 24/7 mayor."

Levine said he received a Saturday afternoon voice message from the governor asking him if the city needed anything from the state.

"I'm going to see him this afternoon," Levine said. "It's all about information. I think a little political posturing and game-playing happened."

Hours later, Scott convened a Zika roundtable at a senior center in Wynwood, the first Miami neighborhood where the virus was identified.

"Hey, governor," Levine told Scott as he shook his hand. "Nice to see you."

During the discussion, largely filled with thank-yous from one public agency to another, Mayor Gimenez told Scott, "Everything is not rosy, governor."

"There are times when communications have broken down a little," Gimenez said.

Scott said his office would share information once it's ready to fully stand behind it.

"It will be timely, and it will be accurate," he said.

After the roundtable, a Miami Herald reporter asked Scott about Levine's accusation that the governor was playing politics with the virus. Scott noted he's crisscrossed the state for months talking about Zika.

"Mayor Levine has not been to any of those events til today," he said. "I talked to him after Wynwood. He unfortunately didn't return my phone call. I reached out again to him this weekend. I have not heard from him."