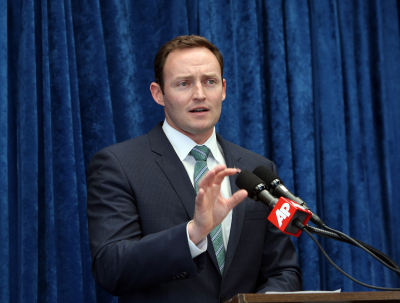 In conservative northern Florida, Democratic U.S. Senate candidate Patrick Murphy was evasive last week on who he'd support as the chamber's next Democratic leader in 2017.

But in the comforts of liberal Broward County on Tuesday, Murphy didn't hesitate to trumpet his allegiance to New York Sen. Charles Schumer.

Across four days, Murphy -- the Democratic frontrunner in Florida's U.S. Senate race -- gave two different answers when asked who he'd back in the leadership contest.

"He’s been doing events with the senator for a year," Karp said.

On Friday, after campaigning with Vice President Joe Biden in Tallahassee, Murphy told reporters: "I haven't thought that far ahead" on who he'd pick for the party's Senate leadership.

"I've got a big election here and I'm focused on getting my message out to the people of Florida," Murphy said.

Flash-forward to last night in Plantation, Murphy was asked the same question at a Democratic club and didn't skip a beat before saying: "I'm going to support Chuck Schumer! New York. He's going to be the next Democratic Senate leader."

Murphy added, "there’s no question that Sen. Schumer, Sen. Harry Reid, the Democrats in the Senate, are on our side. ... We’re in this fight together and he’s going to be a heck of a majority leader in the U.S. Senate."

Murphy's comments were captured on an audio recording of the meeting, provided by his campaign.

With Reid retiring from the Senate this year, Schumer is poised to take over the leadership role but isn't a lock for the job.

So why didn't Murphy pledge his support for Schumer last week?

Karp said it was because Murphy "wanted to keep the focus on Vice President Biden" and he blamed the quick-hit nature of Murphy's brief press conference with reporters.

"It was just a fast-moving thing," Karp said. "I’m glad he got the chance (on Tuesday) to give a longer answer and the answer is, 'of course, he supports him.' "