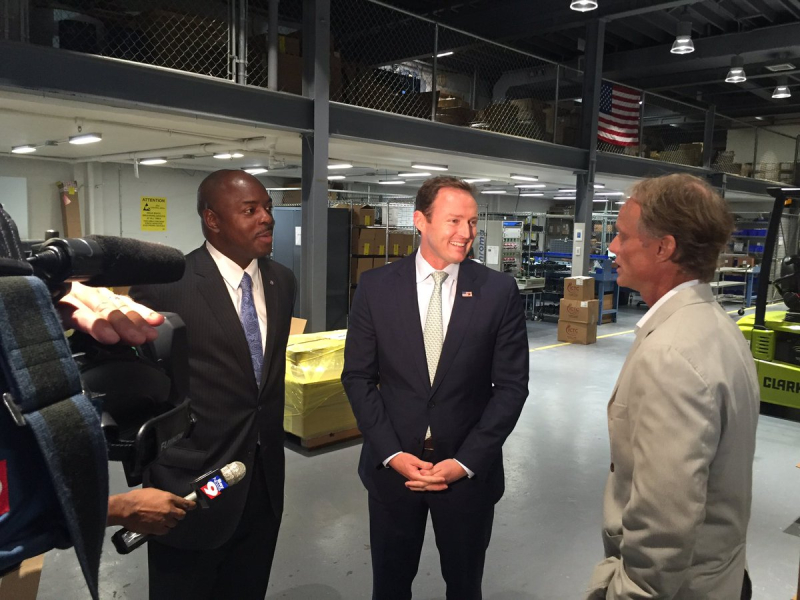 U.S. Rep. Patrick Murphy and state Rep. Ed Narain toured LED light manufacturer LumaStream's headquarters in St. Petersburg on Monday, but in a Q & A with reporters after, the questions veered from jobs to politics -- specifically, the contentious Aug. 30 primaries in which both are seeking the Democratic Party's nod for higher office.

Murphy -- who faces Rep. Alan Grayson of Orlando and Miami labor attorney Pam Keith in the U.S. Senate primary -- addressed a $1 million donation in July from his father, Thomas Murphy Jr., to the Senate Majority PAC, a group supporting Murphy. Campaign finance reform has been a central plank of Murphy's campaign.

When asked about the donation, he said he was "grateful" for his father's support, but then pivoted to talking about the "grassroots" support he's received from smaller donors.

"Of course I'm grateful for my family's support, and my dad's my mentor and my best friend," Murphy, of Jupiter, said. "What I'm more pleased and more grateful for is the over 50,000 people across the country, across the state of Florida, that have been supporting my campaigns."

Murphy also hit Republican Sen. Marco Rubio, who he would face in the general election if his primary bid is successful, for his own hefty fundraising efforts and his flirtation with another presidential run in 2020.

Murphy also addressed a recent Politico report citing anonymous sources saying his campaign had cut television advertising in the run up to the August primary to save about $800,000 to spend in the general election.

"(We) want to continue making sure that we have the resources, ultimately, to defeat Marco Rubio," Murphy said.

For Narain's part, he is also tied up in a primary that will decide who will get to run in the Democratic-leaning state Senate District 19. He faces lawyer Augie Ribeiro of St. Petersburg, Rep. Darryl Rouson of St. Petersburg and former Rep. Betty Reed of Tampa.

The juxtaposition begged the question: Is the Democratic Party establishment coalescing around the Narain campaign?

"I'm proud of the support I've received from the Democratic Party," Narain said, adding in a loose accounting of Democrats who have voiced their support. "I'm not going to run away from that."

But should the Democratic Party play a more neutral role in the primary? Narain said that the party had been "staying out of this until we saw a certain individual come in and start dropping millions of his own money into his own race, which really was going to shift the balance of it."

Narain wouldn't mention Ribeiro by name, but the two jabbed each other last week at a Tiger Bay forum. Ribeiro has criticized Narain's donations from utility and insurance interests, saying he isn't beholden to such donors.

Narain, meanwhile, acknowledged support high up in the Democratic food chain, but that's just because he's a "true Democrat" running.