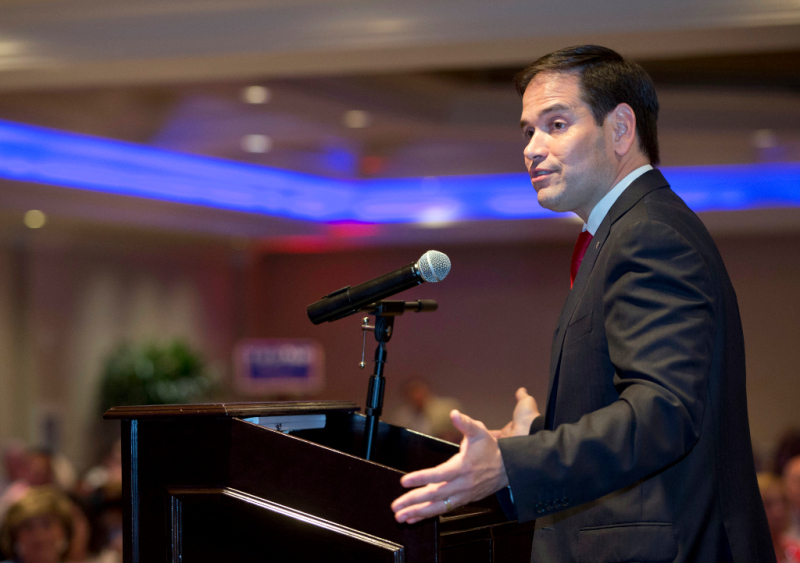 Few candidates in the country have gotten more help from the Boca Raton based company, including $80,400 in the last month alone.

That’s on top of nearly $190,000 in support Rubio has received dating to his time as speaker of the Florda House, when Geo Group landed a major contract with the state, to his presidential run.

Rubio said Monday that he hadn’t read the Justice Department report citing cost and safety concerns at private prisons. Geo Group stock plunged but was on the rise Monday as company officials downplayed any significant harm to their bottom line.

“I’ll look at the report and what they found and if the findings are such that justify their decision, then it will be justified,” Rubio told the Tampa Bay Times on Monday while campaigning in Tallahassee. “At the end of the day, contractors are supposed to save us money, not cost us money.”

The campaign declined to answer a follow-up question about why Rubio has gotten so much attention from the country’s second-largest private prison operator.

Geo Group runs a federal immigration detention center in Broward County that has been the subject of protests and six Florida state prisons. As the Times/Herald recently reported, it is poised to benefit from expansions of state contracts relating to inmate mental health treatment, juvenile detention and electronic monitoring.

The company and other private prison operators have long been major political players, using contributions and lobbying heft to expand its footprint.

Since 2004, Geo Group has given about $1.7 million to federal candidates, according to the Center for Responsive Politics. It has spent $4.7 million on lobbying in the same time, including hiring Navigators Global, which employs founding partner Cesar Conda, Rubio one-time chief of staff. Conda has said he did not lobby on Geo Group matters.

Florida candidates are among the most frequent recipients of Geo Group money. Rubio’s Democratic rival in the Senate race, Patrick Murphy, got $1,000 in 2014. Democratic Sen. Bill Nelson has taken money.

Geo Group gave $100,000 to Right to Rise USA, the super PAC that supported Jeb Bush’s presidential bid. It has invested heavily in the political careers of Florida Republicans Rebecca and Joe Negron, some $288,000 in all.

But Rubio stands out, and Geo Group has been quick to support his 2016 Senate run, with employees giving $30,400. It also gave $50,000 to Florida First Project, the super PAC backing Rubio.

Geo Group also supported Rubio in his House days, pouring $50,000 into Floridians for Property Tax Reform, the committee Rubio used to push his proposals and travel the state, gaining key exposure that helped him in the 2010 Senate run.

While Rubio was House speaker, Geo Group gave more than $100,000 to the Republican Party of Florida.

His connections to Geo Group have come up in recent years. Last year in Iowa, a writer for the watchdog blog, Governing Under the Influence, asked Rubio about the largess.

“I don’t invest in other people’s agenda,” Rubio replied, “they invest in my agenda.”