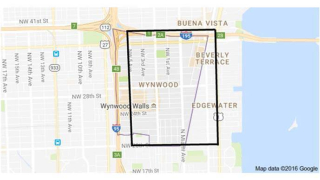 Another 10 people are believed to have contracted Zika virus from mosquitoes in Miami, Gov. Rick Scott’s office announced Monday.

Last week, the state determined that four cases were linked to mosquitoes in a one-square-mile area of Miami’s Wynwood district. The total count is now 14 — two women and 12 men.

As a result, the Centers for Disease Control and Prevention are advising women who are pregnant or plan to become pregnant to steer clear of the area unless they need to be there, Scott’s office announced. The zone is one square mile, north of downtown Miami and bounded by Northwest Fifth Avenue to the west, U.S. Rte. 1 to the east, Northwest/Northeast 38th Street to the north and Northwest/Northeast 20th Street to the south.

The state believes all 14 cases were contracted within that area. Many of them did not show symptoms and were discovered after testing by health officials.

Following the announcement of 10 more cases, Scott requested that the CDC dispatch an emergency response team to assist the Florida Department of Health in testing cases and controlling mosquitoes.

On Friday, the state announced new precautions to combat Zika, which is linked to a birth defect called microcephaly that causes newborn babies’ heads to be smaller than normal.

Health officials are going door to door in Wynwood and have made Zika testing available throughout Miami-Dade and Broward counties, Scott’s office said. And increased mosquito control in Wynwood and around the patients’ homes is underway.

Additionally, the state has given money to OneBlood to test blood donations.

The U.S. Food and Drug Administration, which regulates the blood supply, said Friday that blood collected in Florida between July 20 and July 28, when testing started, “will be quarantined and destroyed.”

As of Friday, 386 travel-related cases of Zika had been confirmed in Florida, with the epicenter of the virus centered in Miami-Dade and Broward.

Map: Area of Miami-Dade County where the Zika cases are believed to have spread. Courtesy image.