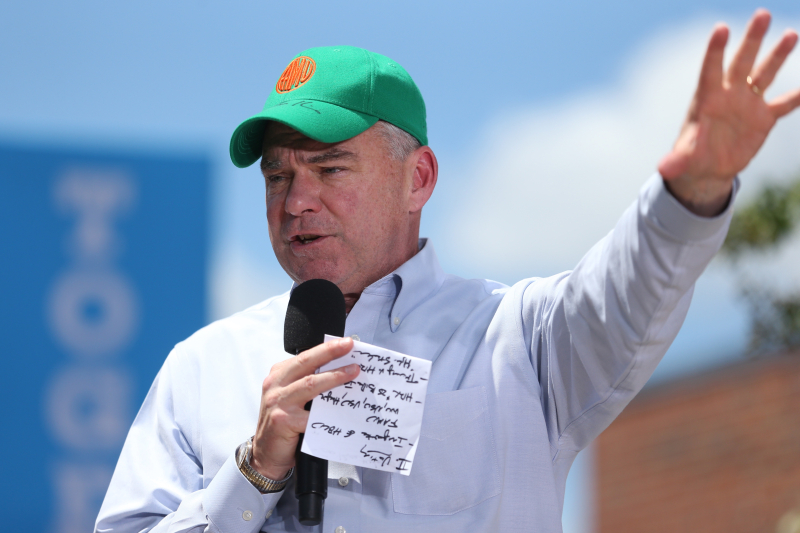 After a day of raising money, touring a local business hub and speaking at a get-out-the-vote rally with university students, Hillary Clinton's vice presidential nominee Tim Kaine made the most of a short visit to Florida's capital city on Friday.

It was his third trip to the Sunshine State -- but first to Tallahassee -- since joining Clinton's ticket last month, he said.

As the Democratic U.S. senator from Virginia took the stage at Florida A&M University this afternoon, he donned a Rattlers hat and somewhat sheepishly hissed a few times while imitating two fangs with his fingers -- an attempt at the university's "Rattler Strike," which charmed a cheering crowd.

During a 15-minute address, Kaine urged FAMU students to not be mere bystanders in this year's election. He encouraged them to volunteer, vote and make sure they and their friends are registered to vote.

"You have a superb reputation -- of any university  -- of student activism and of getting people to understand the critical importance of voting," Kaine told the few hundred students gathered in the blazing summer heat outside FAMU's student union as part of their weekly "Set Friday" event.

"We want FAMU to lead the way," Kaine said to more applause from the crowd.

"We've seen in states all over the country significant efforts by governors and Legislatures to narrow down the right to vote, to narrow down early voting, to increase ID requirements -- to basically make it tougher for people to vote," Kaine said.

He added: "For anybody who cares about small-D 'democracy,' the efforts of state officials to put burdens in the way, reduce participation and do it in a discriminatory way has to call us to righteous action, righteous organization, so we can show those tactics won't succeed."

Kaine also took a few minutes to tout Clinton's credentials and to emphasize the "fundamental differences" between her and Republican presidential nominee Donald Trump.

As an example, Kaine condemned Trump for "being behind the scurrilous and, I would say, bigoted notion that President Obama wasn't even born in this country."

"And Donald Trump has continued to push that irresponsible falsehood, all the way up til now, and that's the difference in this election," Kaine said. "Ku Klux Klan values, David Duke values, Donald Trump values are not American values. They're not our values, and we've got to do all we can to fight, to push back and win." 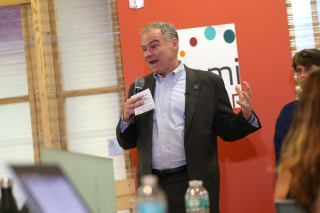 Prior to his stop at FAMU, Kaine spent about 45 minutes nearby meeting with small business owners at a two-year-old tech incubator south of downtown Tallahassee. Kaine and his wife, Anne Holton, toured Domi Station and chatted up several of the entrepreneurs, before Kaine briefly spoke to a crowd of about 40 people there.

He casually introduced himself: "This is my wife, Anne, and I'm Tim Kaine. I'm a senator from Virginia and Hillary Clinton's running mate, which I'm really excited about."

He then used the backdrop of Domi to talk about a new plan Clinton rolled out this week to help promote small businesses. The plan aims to make it easier for start-ups to get off the ground, secure financing and pay their taxes, Kaine said.

He also emphasized the need for communities, like Tallahassee, to find ways to attract and keep a talent pool of young workers.

"The great thing is, you have all the mind-power among the students (of FAMU, Florida State University and Tallahassee Community College), so if you can convince them to stay -- that's what it's all about," he said.

"We have, in this country, the talent to solve any issue that we will face as long as we let all the talent around the table," Kaine added. "Talent is the most precious resource in the world right now -- more than oil, more than water. Talent is a condition that leads to economic success."

About 50 people attended the fundraiser, held at the home of Don Hinkle, a Tallahassee personal injury attorney and prominent Democratic donor. Guests contributed between $500 to $2,700 in order to attend, while hosts raised or contributed $25,000 per couple. (Three weeks ago, Hinkle also hosted a fundraiser for U.S. Senate candidate Patrick Murphy while Vice President Joe Biden was in town campaigning for him.)

Kaine is now headed back to Broward County, where he was a few weeks ago -- this time for more events and another fundraiser on Saturday.