Trump meets with Gold Star families before rally in Jacksonville 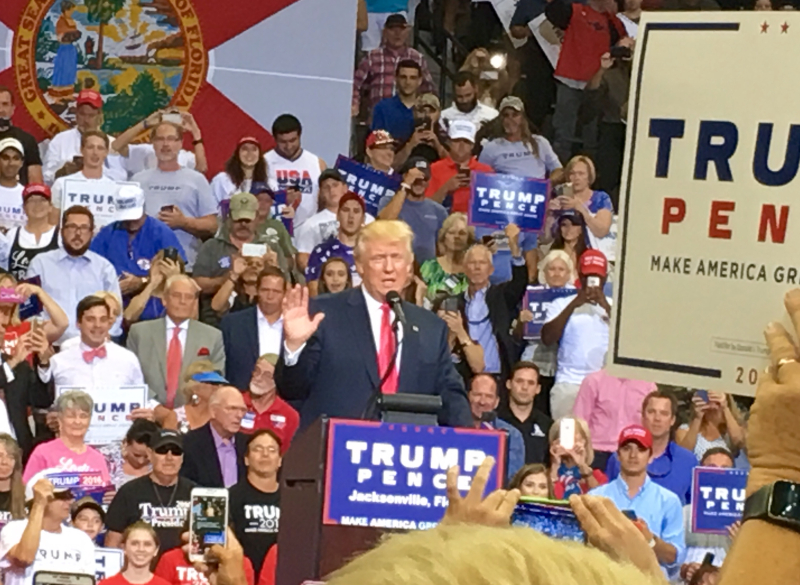 After days of stirring controversy by going back and forth with the family of a soldier who died in Iraq, Republican presidential nominee Donald Trump took a decidedly different approach on Wednesday night in one of the nation's biggest military towns avoiding any further engagement that could trigger more backlash from veterans groups.

Trump never mentioned U.S. Army Capt. Humayun Khan by name, but instead led off his more than one hour speech by telling the crowd how he was honored to meet with a half dozen other Gold Star families - surviving spouses and parents of soldiers killed in combat- in a private event before a rally in Jacksonville.

"Just incredible people," Trump told more than 10,000 people at a rally at the Jacksonville Veterans Memorial Arena. "A gentleman handed me a check, and he said 'you know Mr. Trump, this is for your campaign.'"

Trump said he told the man he didn't have to do that.

"He goes, 'I do,'" Trump said recounting the conversation. "He said, 'it is more money than we can afford, but I want you to have it for your campaign.' I just thought it was amazing. The love in that room for this country is beyond belief, believe me."

"Election year or not, the VFW will not tolerate anyone berating a Gold Star family member for exercising his or her right of speech or expression,” Brian Duffy, the newly elected leader of the VFW, said in a statement earlier this week.

It all goes back to last week, when Khan's father, Khizr Khan during the Democratic National Convention criticized Trump's proposals to bar Muslims from entering the United States. Trump over the weekend responded by suggesting Khizr Khan's mother Ghazala, who stood by her husband's side, "had not been allowed to have anything to say."

By trying to show respect to Gold Star families on Wednesday in Jacksonville, Trump was avoiding escalating the situation further in a key military town. Duval County has nearly 100,000 veterans - more than any county in Florida despite being just the 7th largest total population in the state. In addition, Duval County is home to two of the five largest Navy bases in the United States, with more than another 100,000 soldiers and other personnel connected to those bases.

Trump cannot afford to lose support in Duval County which has been pivotal in deciding past presidential elections. In 2012, Mitt Romney beat President Barack Obama in Duval County by about 15,000 votes out of more than 400,000 cast en route to losing Florida. When George W. Bush - the last Republican to win Florida in 2004 - ran against John Kerry he carried won the county by more than 60,000 votes. If Trump cannot do better than Romney in Duval County, his chances of winning Florida's 29 electoral college votes becomes far more difficult.