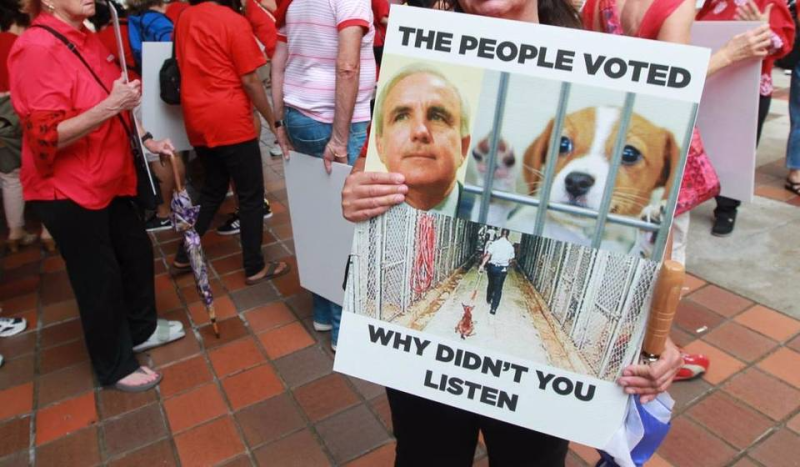 Miami-Dade Mayor Carlos Gimenez’s Instagram account contains a collection of snapshots typical of a politician: speaking at a budget hearing, reading to schoolchildren, taking a selfie with other leaders.

But just about every humdrum photo has been received with unusual venom from social media commenters.

“INNOCENT ANIMALS ARE BEING KILLED LIKE TRASH AND IT'S YOUR FAULT!” And “you’re disgusting for what you’ve done to our animals!!!!” And “I can certainly tell you where to put that selfie stick.” And so on.

The mayor’s Instagram account has been largely hijacked by a particular group: animal-rights activists who have long railed against euthanizing unwanted pets in Miami-Dade County. It’s gotten this bad: One commenter — irate even in far-off Canada — warned he might try to put down the mayor or his family, a threat Miami-Dade police are now investigating.

Despite a gleaming new county animal shelter and the county’s claim that few animals are euthanized any more, online commenters continue to target Gimenez – who is running for re-election against Raquel Regalado, an opponent who enjoys the support of some of the county’s high-profile animal activists.

The mayor said he’s troubled by the dark tone the social media heckling has taken.