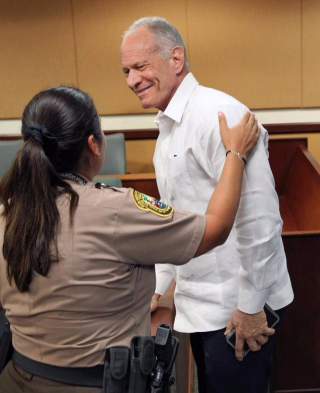 Former Miami-Dade mayor and police director Carlos Alvarez beat domestic-violence accusations Monday after his ex-girlfriend failed to show up to testify at trial.

Prosecutors had no choice but to drop the misdemeanor battery charge because they didn’t have the testimony of Evelyn Fernandez, a Miami-Dade police lieutenant with a long and tumultuous relationship with Alvarez.

Her absence wasn’t a surprise. Fernandez is facing her own criminal trial on allegations she broke into Alvarez’s Coral Gables condo. Had she been forced to testify against her former boyfriend, Fernandez had planned to invoke her right to remain silent.

Alvarez, donning his familiar guayabera shirt while talking to reporters outside Miami’s downtown family courthouse, insisted he was innocent. “Just a relief,” he said of the charge being dropped. “Hopefully we can both move on with our lives.”