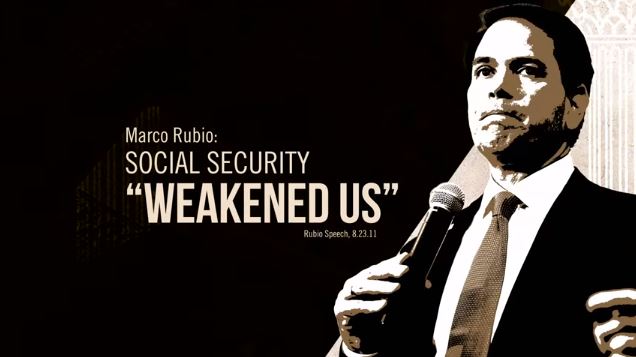 National Democrats are kicking off their fall ad campaign with vigor on Wednesday, with the debut of an attack ad on Marco Rubio over Social Security and Medicare.

The 30-second spot from two liberal super PACs -- the Senate Majority PAC and AFSCME PEOPLE -- is part of a multi-million-dollar effort between the groups to support Rubio's challenger, Democratic U.S. Rep. Patrick Murphy.

AFSCME PEOPLE, the political arm of the national government workers union, is pouring $1.8 million into the ad campaign. For the Democrats' Senate Majority PAC, the ad represents the kick-off of $10 million in reserved ad time the group has planned before Election Day.

Using Rubio's own words against him, the joint Senate Majority PAC / AFSCME PEOPLE ad argues Rubio has "weakened us" because of his desire "to cut Social Security and Medicare."

The ad accuses Rubio of taking "almost $1 million from the insurance industry, which would profit from his privatization plans" for the two federal entitlement programs.

"Marco Rubio’s reckless plans for Social Security and Medicare might be great for his campaign contributors, but they’re wrong for Florida," Shripal Shah, spokesman for Senate Majority PAC, said in a statement.

"Marco's own mother relies on Social Security as her sole source of income. Marco would never do anything to hurt his mother or the millions of Florida seniors who depend on Social Security and Medicare, and he'll continue to fight to strengthen the programs for future generations," Rubio spokesman Michael Ahrens said in a statement.