For $25K, Miami donors can have dinner with Ivanka Trump 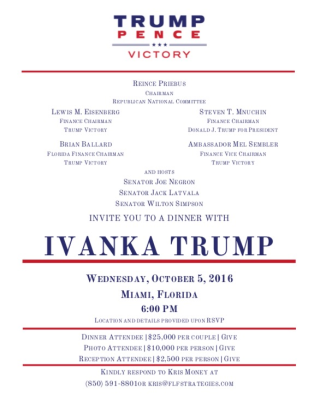 Donald Trump's oldest daughter will headline a $25,000-a-head dinner fundraiser on Oct. 5, according to an invitation obtained by the Miami Herald. For $10,000, donors can get a photo with Ivanka Trump, and for $2,500, they can attend a reception.

The invitation doesn't list a location, but Trump's past local fundraising events have been held at his Trump National Doral golf resort. Ivanka Trump has been one of her father's most effective campaign surrogates.

Donald Trump attended a pair of fundraisers Tuesday in Miami and Longwood, on a day after his first debate against Hillary Clinton. His campaign said it raked in $18,000 in about 24 hours.

This post has been updated with a new invitation and new date: Oct. 5 instead of Oct. 6.