Disgusted with Donald, Hillary? Here are your options 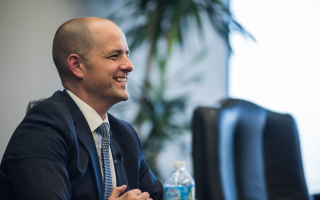 If you're disgusted with Donald Trump and had it with Hillary Clinton, you'll have five options on your presidential ballot in Florida, but Evan McMullin (left) won't be among them.

Gov. Rick Scott's administration blocked the 11th-hour insurgent independent candidate from the state's November ballot, saying he failed to comply with a key provision of state election laws because he was not nominated by a national political party at its convention.

A letter dated Sept. 7 from Maria Matthews, director of the state Division of Elections, to Ernest William Bach of Largo, chairman of the Independent Party of Florida, said in part: "Your submission does not comply with the requirements of section 103.021(4)(a) because your party is not affiliated with a 'national party' -- a political party that by definition is registered with and recognized as a qualified national party by the Federal Election Commission."

The full letter is here

Bach protested the action and wants a review. He told the state that the 248,000 people who belong to the Independent Party of Florida will be "wrongfullly excluded and totally disenfranchised" from casting ballots for president in the state. He also asserts that the decision means that county election supervisors must notify all of those voters in writing that they must re-register with another party by the Oct. 11 book-closing deadline to be able to vote in November.

Bach had given the state a list of 29 presidential electors for McMullin, including Republican strategist Rick Wilson, his wife Molly, and David Bishop, a GOP consultant and former legislative staffer who said he changed his party affiliation from Republican to the Independent Party.

"I can't support either of the two major party candidates," Bishop said. "I went looking, and he's who I chose. It was a hard decision to make because I've been a Republican for most of my adult life, but I'm so disgusted."

Besides Trump and Clinton, the Florida ballot will include Libertarian Party candidate Gary Johnson, Jill Stein of the Green Party, Darrell Castle of the Constitution Party of Florida and Roque (Rocky) de la Fuente of the Reform Party, plus a space for a write-in candidate (six write-ins qualified, and some disgruntled voters will surely take full advantage of this opportunity).

And, yes, that's the same Rocky de la Fuente who just trailed badly in the Democratic primary for U.S. Senate. The Rock appears destined to hold a unique place in the annals of Florida politics: He will have lost two races for high national office running in two different parties in the same election cycle.

McMullin, 40, a former CIA officer and policy advisor to House Republicans, emerged as an alternative to Trump last month, but that left him and his supporters very little time to meet Florida's Sept. 1 qualifying deadline to get on the ballot.

Tens of thousands of ballots will soon be in the mail to overseas and military voters, leaving McMullin with only one alternative in Florida: a massive write-in campaign that in the past has been extremely difficult to execute.