« Murphy, Rubio have agreed to two debates; others up in the air | Main | Rubio goes on air on Miami Spanish-language TV »

In secret tape, Joe Garcia says Hillary Clinton 'is under no illusions that you want to have sex with her' 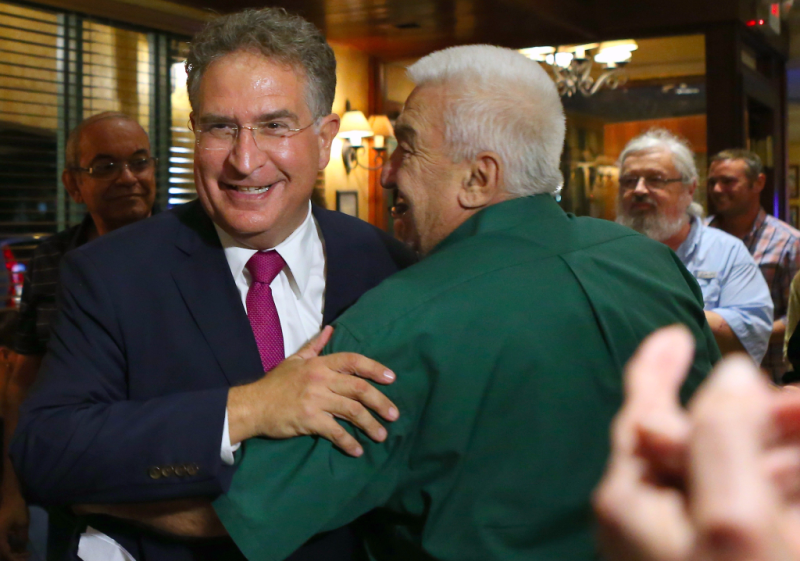 Joe Garcia, the former Miami Democratic congressman running for his old seat, told supporters in a candid moment over the weekend that Hillary Clinton "is under no illusions that you want to have sex with her, or that she's going to seduce you."

Why Garcia went there is unclear. He was secretly recorded by a political "tracker" as he spoke informally at a Key West Democratic campaign office opening Saturday, video obtained by the Miami Herald shows.

The video -- recorded upside down as if a cellphone was in the tracker's hand -- showed Garcia standing in an office hallway with a few other men, apparently before Garcia was scheduled to address the full crowd. Clinton signs decorate some of the walls.

"I believe that we're going to have -- I'll mention it when I speak -- I believe we're about to see the most consequential presidency that we've seen since Lyndon Johnson," Garcia says. "This is not because I think Hillary Clinton is the greatest ever. But I do believe she is extremely, exceedingly competent, and she -- I know this is going to sound weird to you, but to me, as somebody who studies history, she's going to be very similar to Lyndon Johnson.

"Lyndon Johnson wasn't a particularly charming man, wasn't a particularly nice man: He would ask you nice, and then when you didn't do it, he made you do it," Garcia continued. "And Hillary is under no illusions that you want to have sex with her, or that she's going to seduce you, or out-think you."

One of the men in the hallway then makes an inaudible comment.

"I don't want to be offensive to women," Garcia responds. "What I'm talking about is exactly that: It's getting it done. Unlike Obama, who has this profound sense that logic can move people -- it can't move crazy. That's trending in the Republican Party."

Garcia then recommends listening to the Johnson tapes, admiring how Johnson got votes for the Civil Rights Act by calling senators from Western states by threatening to kill money for their water projects.

Asked to explain why he would refer to someone wanting to have sex with Clinton, Garcia issued a statement to the Herald.

"I believe Secretary Clinton is the most competent and qualified presidential candidate in the history of this country, man or woman," he said. "My comments speak to Secretary Clinton's focus on getting things done, and not on the gender stereotypes and biases women in public life are frequently subjected to. I fully support Hillary Clinton for president, and I'm confident she will be one of our country's most effective presidents."

"It's shameful and disgusting that Joe Garcia would describe Hillary Clinton's qualifications to serve as president in terms of whether or not he would have sexual relations with her," National Republican Congressional Committee spokeswoman Katie Martin said in a statement. "It's time for national Democrats to answer whether they are going to support a sexist candidate like Joe Garcia who would say such sexually disparaging things about the first-ever female Democratic nominee for President of the United States."

"I apologize for my poorly worded comment about Secretary Clinton," he said. "My comments were intended to speak to Secretary Clinton's relentless focus on getting the job done, despite the unjust gender stereotypes and biases women in public life are subjected to."

This post has been updated to include Garcia's second statement.