TV Ad: It's bad when Marco skips work, worse when he doesn't

The Senate Majority PAC is out with a new TV ad attacking Marco Rubio's absenteeism and record of education funding and Social Security. The transcript:

Announcer: Marco Rubio has the worst attendance record of any Florida senator in 50 years. But it’s even worse when he shows up.

Announcer: He wants to eliminate the Department of Education – and has voted for billions in education cuts.

Announcer: Marco Rubio. It’s bad when he misses work. It’s worse when he shows up. 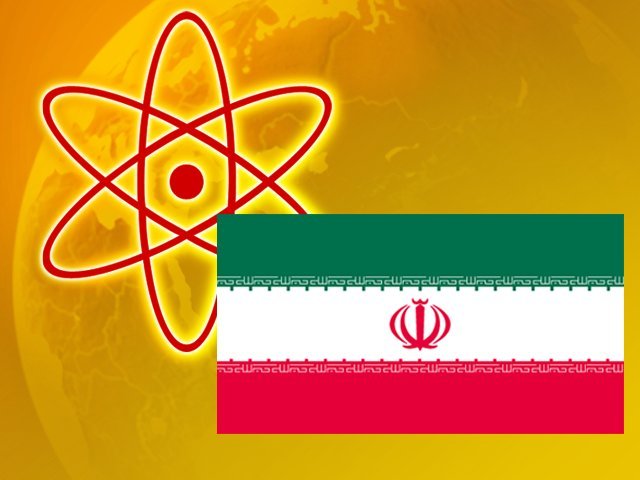 Republicans led by House Speaker Paul Ryan and Sen. Marco Rubio have new ammunition in their months-long assault on the U.S. accord to prevent Iran from developing nuclear weapons.

Rubio cited a Wall Street Journal article reporting that the biggest enticement for Iran to free four American hostages in January wasn't the widely reported release of $1.7 billion frozen by Washington since the 1979-80 hostage crisis.

Instead, according to the Journal, the U.S. government lifted sanctions that had blocked Iran from procuring ballistic missiles eight years earlier than allowed under the 2015 nuclear deal Tehran and Washington sealed.

"It now appears that on the same day American hostages were freed from Iran, the administration not only agreed to the $1.7 billion cash ransom payment, but violated a key term of the nuclear deal by prematurely lifting ballistic missile sanctions."

Pressed by reporters at a briefing, State Department Deputy Spokesman Mark Toner said the United States had "conducted a very thorough review" before deciding to lift the sanctions on the banks.

Asked directly whether the review had determined that the banks were no longer tied to Iran's missile procurement, Toner responded: "Yes, I mean that's exactly right. That they were no longer carrying out actions that we believed were linked to, or linked them to, the ballistic-missile program."

He added that "we continue to have concerns about Iran's ballistic-missile program." 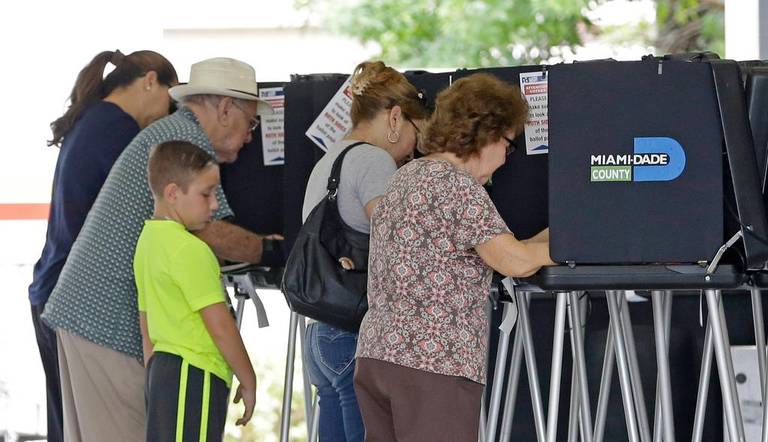 Officials with the Federal Bureau of Investigation held a secret conference call with all 67 county supervisors of elections in Florida on Friday afternoon to discuss the security of voters’ ballots ahead of the November election.

One elections supervisor told the Herald/Times that the FBI informed supervisors of “a malicious act found in a jurisdiction” in Florida, but he stressed “we’ve not been hacked” and nothing was found to have happened at the state level, such as with Florida’s voter registration system.

“It was a good call in that they were proactive, and we need to have federal and state authorities working together,” Leon County Elections Supervisor Ian Sancho said. “I would warn people against jumping to any conclusions. ... The positive and aggressive discussion we had is exactly what we need to do to be secure for Nov. 8.”

Florida Department of State spokeswoman Meredith Beatrice acknowledged the department “participated in an informational call related to elections security” that the FBI convened. 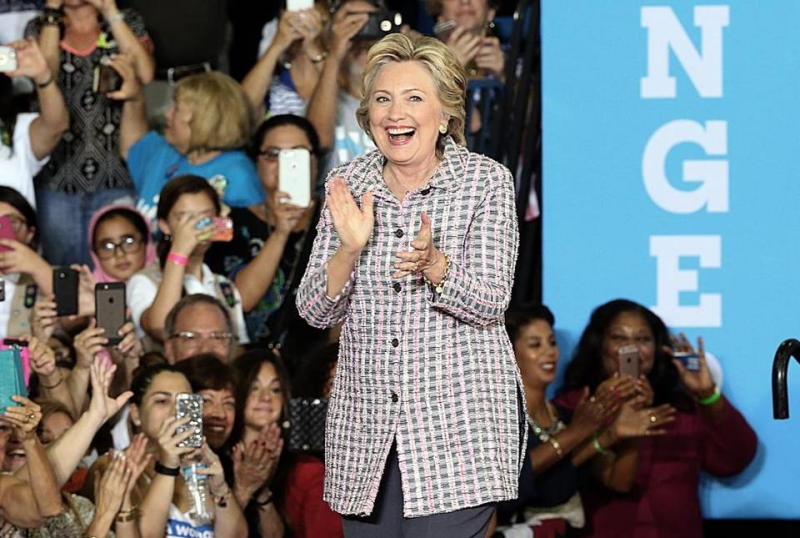 Hillary Clinton stumped in Broward County for the first time in nearly a year Friday, as Florida polls showed her barely edging Donald Trump and as fearful Democrats openly worried about the status of her campaign, particularly when it comes to reaching black voters.

But Clinton appeared to still be savoring her successful debate performance against Trump.

“Did any of you see the debate Monday night?” she said soon after taking the stage at the packed Coral Springs Gymnasium.

There was a strategic reason for bringing it up: On Monday, Clinton mentioned Alicia Machado, the Venezuelan-born former beauty queen Trump once called “Miss Piggy” and “Miss Housekeeping.”

On Friday morning, it was still bothering Trump. He went on an early-morning Twitter rant beginning at 3:20 a.m. and, between 5:14 a.m. and 5:30 a.m. posted about the 1996 Miss Universe’s weight gain and debunked “sex tape.”

Clinton was only happy to keep talking about Machado, who lives at least part-time in Miami Beach and has campaigned for Clinton in Doral and Miami.

“Really, who gets up at 3 o’clock in the morning to engage in a Twitter attack against a former Miss Universe?” Clinton asked. “I mean, he hurled as many insults as he could. Really, why does he do things like that?”

“I mean, his latest Twitter meltdown is unhinged, even for him,” she continued, adding that it “proves yet again that he is temperamentally unfit to be president and commander-in-chief.”

A West Virginia newspaper reports that U.S. Sen. Marco Rubio and another member of Congress stopped along a highway in that state late Thursday after spotting a four-vehicle accident.

Rubio and U.S. Rep. Joe Heck of Nevada pulled over on Interstate 70 to try to help the victims, according to The Intelligencer. A 62-year-old man died in the accident. Heck is a physician.

The two men had attended a political fundraiser.

"Jeanette and I send our prayers and condolences to the family of the individual who tragically lost their life in Thursday night’s accident in West Virginia," Rubio said in a statement to The Intelligencer. "I want to thank all of the first responders who arrived quickly and did their jobs with swift professionalism. Please join me in praying for all those affected."

With just more than five weeks until the Nov. 8 election, here's where the money race stands between the two groups as of Sept. 23:

The Florida Democratic Party contributed $150,000 to United for Care last week. Additionally, the group sent an email to supporters Friday saying it received another $1 million contribution from a pro-medical marijuana group not included in the latest campaign finance data.

The lone donation to Drug Free Florida was $250 from Dr. Thomas Harris of Orlando.

Though she was in South Florida on Friday, home to the biggest Cuban-American population in the country, Hillary Clinton did not mention a bombshell Newsweek report Thursday that Donald Trump’s hotel and casino company broke the U.S. trade embargo in 1998. Earlier Friday, Republican Sen. Marco Rubio said Clinton shouldn’t criticize Trump over the report given that she wants to do away with the embargo.

“It’s kind of hypocritical to be out there screaming about this when she supports lifting the embargo and making it easier for everyone to invest,” he said.

Clinton had told reporters in Ohio on Thursday that despite her position, it mattered that Trump’s business might have secretly broken U.S. law.

“Their real concern is about jobs and what we’re going to do for America, not about something that is reported to have happened 20 years ago,” she said.

Patrick Murphy didn't campaign with Hillary Clinton in Florida on Friday, citing a scheduling conflict. But Clinton mentioned Murphy's name at a rally in Coral Springs -- and got in a jab at the Republican whom Murphy is trying to unseat: U.S. Sen. Marco Rubio.

"I sure hope Florida sends some reinforcements to the Senate and elect Congressman Patrick Murphy," Clinton said. "I think Florida deserves a full-time senator, don't you?"

Clinton didn't endorse Murphy until after his primary against Orlando Rep. Alan Grayson.

Warming up the crowd at the Coral Springs Gymnasium were U.S. Sen. Bill Nelson and Reps. Debbie Wasserman Schultz of Weston and Alcee Hastings of Delray Beach, among others.

Hillary Clinton kicked off her rally in Coral Springs on Friday by offering "our thoughts and our prayers" to the family and fans of the late Miami Marlins ace José Fernández.

"When he left Cuba he did not speak a word of English," Clinton said. "He never forgot where he came from."

Fernández, who was buried Thursday after being killed in a Sunday morning boating accident.

Clinton then mentioned a Coral Springs resident: Bob Levinson, a former FBI agent who disappeared in Iran more than nine years ago. 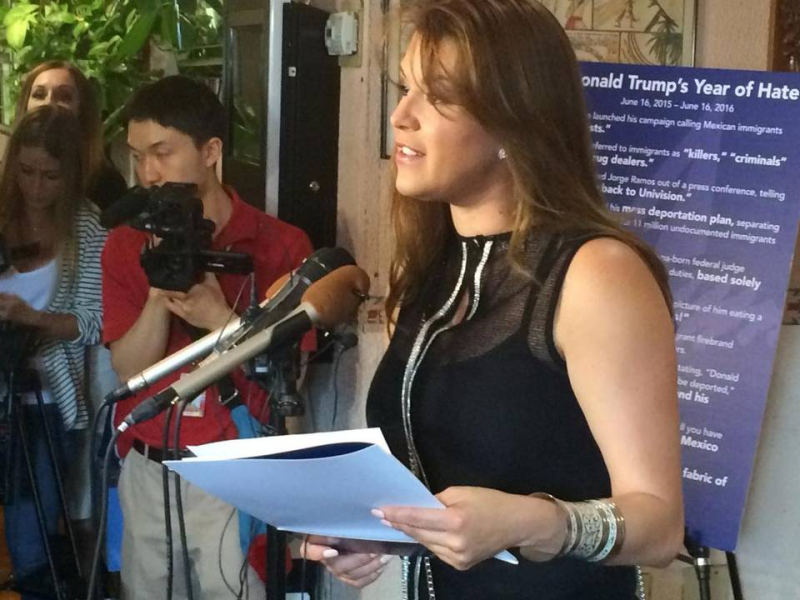 In the final moments of the first presidential debate, Hillary Clinton, the first woman nominee of a major party, brought up rival Donald Trump’s comments about women, and one woman in particular.

"This is a man who has called women pigs, slobs and dogs, and someone who has said pregnancy is an inconvenience to employers," Clinton said. "And one of the worst things he said was about a woman in a beauty contest. He loves beauty contests, supporting them and hanging around them. And he called this woman ‘Miss Piggy.’ Then he called her ‘Miss Housekeeping,’ because she was Latina. Donald, she has a name."

"Her name is Alicia Machado," Clinton continued. "And she has become a U.S. citizen, and you can bet she's going to vote this November."

Within minutes of Clinton’s remarks, her campaign tweeted out a two-minute video of Machado, who supports Clinton and has campaigned for the Democratic candidate, describing her experiences with Trump.

"For sure, he is not a good person," she told Inside Edition. "He called me ‘Miss Piggy,’ ‘Miss Housekeeping.’ "

Trump spokesman Jessica Ditto said in a statement that Clinton’s and Machado’s claims "are totally baseless and unsubstantiated claims."

While we did not find reports of Trump describing Machado in those exact words it’s clear that he criticized her for her weight.