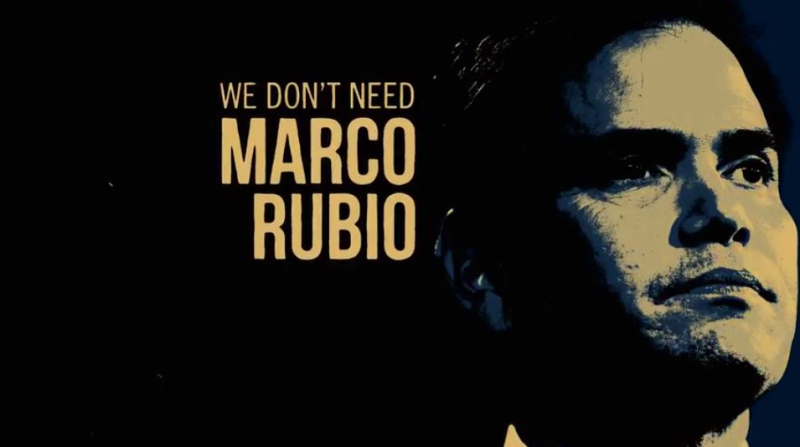 Two liberal labor unions have teamed up to launch a new attack ad on Friday that criticizes Republican incumbent Marco Rubio's legislative "priorities" and casts him as out of touch with Floridians.

The ad from AFSCME People and AFT Solidarity accuses Rubio of favoring cuts to Social Security and Medicare and also says he "voted to slash school funding by billions of dollars and would eliminate the Department of Education."

The 30-second spot will air in the Tampa and Orlando media markets through the end of the month, AFSCME PEOPLE said. AFCSME and AFT's political committees are jointly funding the $1.3 million ad buy.

"Marco Rubio is more concerned with his chances to run for president in 2020 than to tackle the issues that Floridians care about as proven by his dismal record when he actually does show up for work," Shirin Bidel-Niyat, AFSCME’s assistant director of political action, said in a statement. "This ad reminds voters of something they want so badly to forget: Marco Rubio is only out for Marco Rubio, not for their families and their communities."

"Marco also believes our children are best served by an education system that's run by Floridians at the state and local level, not by the federal government bureaucrats who bankroll Patrick Murphy's campaign and paid for this false attack ad," Ahrens added.

For AFSCME PEOPLE, the ad represents the second wave of $1.8 million the union plans to spend on TV ads in Florida's U.S. Senate race. The union's first ad -- a joint operation with the Senate Majority PAC -- also criticized Rubio over entitlement programs. PolitiFact rated the claims in that ad "Half True."