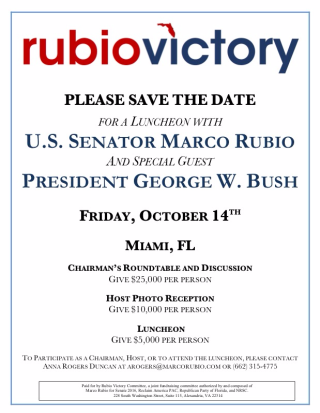 Marco Rubio has snagged a Bush to raise money for him -- and it's not his former presidential rival, Jeb.

Former President George W. Bush will headline a pair of fundraisers for Rubio next month, the Miami Herald has learned.

On Oct. 14, Bush will be the "special guest" at a Miami luncheon for Rubio. He will then play the same role at a Palm Beach reception. The campaign has yet to announce the location for either event, but donors were sent "save the date" invitations Monday.

The Palm Beach event was first reported by the Palm Beach Post. Rubio's Democratic challenger, Patrick Murphy, is a congressman in nearby Jupiter.

The minimum contribution requested to attend either gathering is $2,700. Give $25,000 and participate in a "chairman's roundtable and discussion" with Bush.