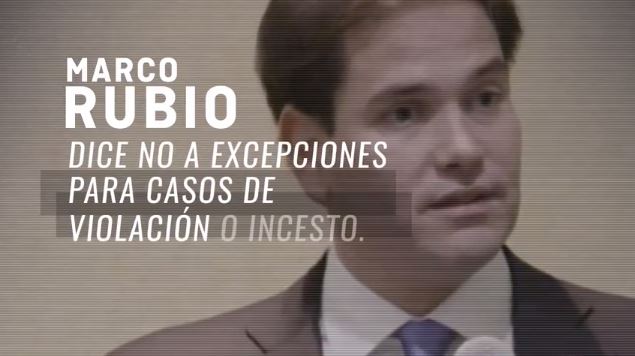 With 41 days until Election Day, Democrat Patrick Murphy has released the first Spanish-language ad of his U.S. Senate campaign in an effort to court Hispanic voters.

The 30-second spot is a translated version of an ad the campaign released last week in English, which criticizes Republican incumbent Marco Rubio for his stance on abortion and which promotes Murphy's endorsement from Planned Parenthood.

More from PolitiFact: "Rubio would take away right to abortions for rape or incest victims, Murphy says"

In the new ad, Murphy -- who isn't versed in Spanish (Rubio, a Cuban-American, is fluent) -- speaks the ad's tagline in Spanish.

"The Murphy campaign is proud to release its first Spanish-language TV ad," Balsera said in a statement. "(Rubio) is irresponsible on women’s health and Florida women across this state deserve to know that Rubio doesn’t stand with them. Patrick will show up and work hard for Florida women to defend their right to choose and protect their access to health care."

"Not only does Murphy support using taxpayer money to fund abortions, he also supports late-term abortions. Murphy's extreme positions on abortion put him out of touch with the vast majority of Floridians," she said in a statement.

Murphy's campaign is spending at least $1 million to run the ad in Miami, Tampa and Orlando.

In announcing the ad, the campaign sent out a dual press release in English and in Spanish, only the second time the campaign has done so since Murphy announced his campaign 18 months ago. (The first was last week when Balsera's hire was announced.)

Rubio released his first Spanish-language ad of the general election on Sept. 12. It, too, was a translated version of an English-language ad Rubio's campaign had already aired.

In the past week, Rubio has also released two other Spanish-language ads: one last week and another today.

Hispanic voters could prove the difference in this election cycle, so political groups on both sides are producing more Spanish-language ads as Election Day draws near.

For instance, the National Republican Senatorial Committee -- which supports Rubio -- has released a couple Spanish-language attack ads against Murphy so far. And on Monday, a coalition of liberal groups debuted a billboard in Spanish (near Rubio's Senate office in Miami-Dade County), which showcases Rubio's support for Republican presidential nominee Donald Trump.