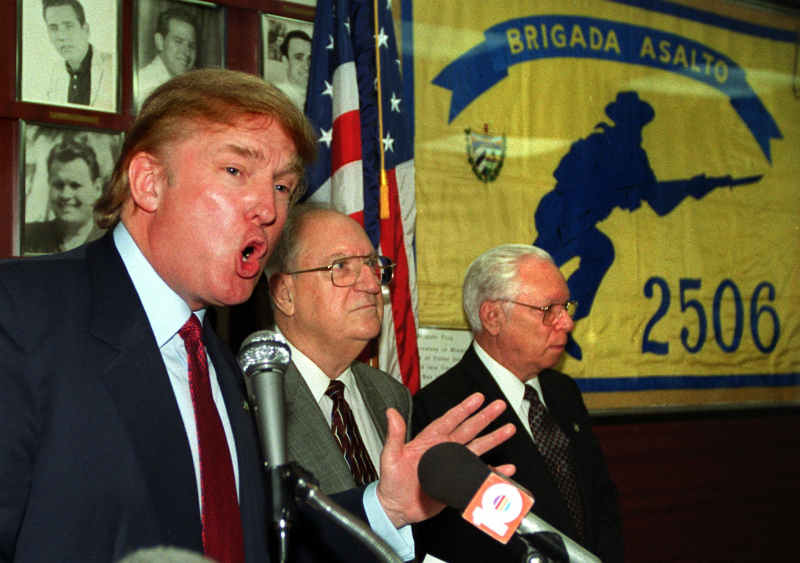 Donald Trump’s hotel and casino company secretly spent money trying to do business in Cuba in violation of the U.S. trade embargo, Newsweek reported Thursday in a story that could endanger the Republican presidential nominee’s Cuban-American support in South Florida.

Trump Hotels & Casino Resorts paid at least $68,000 to a consulting firm in late 1998 in an attempt to give Trump’s business a head start in Cuba if the U.S. loosened or lifted trade sanctions, according to the front-page Newsweek report, titled “The Castro Connection.” The consulting firm, Seven Arrows Investment and Development Corp., later instructed the casino company on how to make it look like legal spending for charity.

The following year, Trump flirted with a Reform Party presidential run, giving a November 1999 speech to the Cuban American National Foundation in Miami where he cast himself as a pro-embargo hardliner who refused to do potentially lucrative business on the communist island until Fidel Castro was gone.

Neither Trump nor Richard Fields, the head of Seven Arrows consulting, responded to Newsweek’s requests for comment. Trump later sued Fields, and former Trump adviser Roger Stone suggested to Politico Florida that Fields might have acted on his own, without Trump’s approval, in exploring doing business in Cuba. Newsweek cited an anonymous former Trump executive who claimed “Trump had participated in discussions about the Cuba trip and knew it had taken place.” Trump hired the same consulting firm to try to develop a Florida casino with the Seminole Tribe.

When Seven Arrows billed Trump’s company to reimburse its Cuba work, according to Newsweek, it suggested using “Carinas Cuba” as charitable cover to get an after-the-fact Cuba license from the U.S. Office of Foreign Asset Control. OFAC doesn’t issue licenses after companies have already gone to Cuba, and the Catholic charity is actually named Caritas Cuba.

The report comes as Trump has worked to shore up Hispanic support in Miami-Dade County, where Cuban Americans comprise about 72 percent of registered Republicans. Hemet with a group of mostly Cuban Americans Tuesday in Little Havana, and earlier this month in Miami he blasted President Barack Obama’s reengagement policy with the island, after sounding OK with it last year.

“The article makes some very serious and troubling allegations,” he said in a campaign statement. “I will reserve judgment until we know all the facts and Donald has been given the opportunity to respond.”